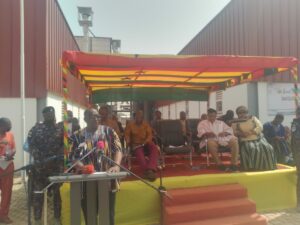 The Savelugu Municipal Rice Processing Factory, which received support through the government’s One District, One Factory (1D1F) Common User Facility (CUF) Initiative, has a state-of-the-art rice processing equipment with the capacity to produce 1.5 and 2.8 tonnes of processed rice per hour.

The construction of the factory commenced in January 2020 and was completed and handed over in July, 2021.

The processing plant installed at the factory included a modern parboiling, milling and packaging plants with a standby generator and a mechanised borehole to supply the factory with water.

It also has a warehouse, fully furnished office accommodation, a conference room, laboratory room and a canteen for the workers.

The total cost of the factory is about GH¢7.375 million, including the cost of factory building, processing plant and machinery, offices, office equipment and a Nissan Double Cabin Pickup vehicle.

Mr Alan Kyerematen, Minister for Trade and Industry, who inaugurated the factory at Savelugu in the Northern Region, said it would increase the productivity of farmers in the area.

Mr Kyerematen said, “Despite the hard work of farmers in this area, they still remain poor because they are unable to take advantage of the full value of what they produce. This facility will help reverse the narrative.”

He swore into office a nine-member Board of Directors to oversee the management and operations of the factory.

He said, “In addition, over 754 farmers in the Savelugu Municipality and neighbouring communities will be directly engaged to supply rice to the factory.”

Alhaji Shani Alhassan Saibu, the Northern Regional Minister, said the factory would serve as a catalyst that would bring about the needed development in the region while enhancing food security in the country.

She urged residents to take advantage of the initiative to enhance sustainable growth and development of the area.

Alhaji Sayibu Braimah, Chairman of the Board of Directors of the factory, pledged to discharge their duties efficiently to ensure that the factory achieved its intended purpose.

Meanwhile, Mr Kyerematen has also inaugurated the Savelugu Technology Solution Centre to facilitate the production of spare parts and repair services, manufacturing of agro-processing equipment, and providing training for human resource and capacity building for various businesses in the area, including the factory.

The government’s 1D1F CUF is a farmer-owned agro-industrial processing facility established with seed funding from the Ministry of Trade and Industry under the Rural Enterprises Programme.

It seeks to enhance the ability of farmers and other agricultural value chain actors, with little or no financial capacity, to establish their own common user processing facilities to process their farm produce.