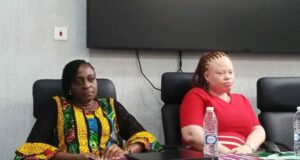 Ghana Federation of Disability Organizations and Sightsavers have urged the government to ratify the African Disability Protocol (ADP) as a matter of national priority to effectively integrate the rights of Persons with Disabilities in Ghana and throughout the African continent.

PWDs are commonly exposed to harmful practices, such as institutional discrimination, social exclusion, higher rates of poverty, and an increased risk of violence and abuse, notably for those with albinism, women, girls, and elderly people with disabilities.

Mrs. Mawunyo Yakor-Dagba, President of the GFD, gave a host of reasons why Ghana should ratify the disability protocol during a stakeholder conference in Accra organised by the GFD in partnership with Sightsavers.

She said it would help promote, protect, and ensure that the inherent discrimination against PWDs was permanently eradicated, as it was intended to address issues such as customs, traditional beliefs, harmful practises, and the roles of family, care-givers, and community, as well as ritual killings.

She also urged civil society organisations and individuals to join the campaign to persuade Ghana’s government to ratify the Africa Disability Protocol, which would lead to the full integration of PWDs’ rights in society.

Madam Grace Antwi-Atsu, Senior Global Advocacy Advisor, responsible for West Africa at Sightsavers, said the protocol required the deposit of 15 instruments of ratification by AU Member States for it to enter into force.

She said 11 signatures had been collected as of the previous update, including those from Angola, Burkina Faso, Cameroon, the Central African Republic, Gabon, Mali, Malawi, Mozambique, Rwanda, South Africa, and Togo.

She also said five countries, including Angola, Burundi, Kenya, Mali, and Rwanda, have ratified the disability protocol, adding: “ratification by 10 more states will ensure that the Protocol enters into force.”

She emphasised that the required number of regional ratifications would bring the Protocol into force, allowing PWDs across the continent to fully enjoy their rights, and urged Ghana to ratify the ADP as soon as possible.

Although the United Nations Convention on the Rights of Persons with Disabilities (UNCRPD) was the first comprehensive human rights treaty of the twenty-first century, with the greatest number of signatories on its first day, the ADP responds to African contextual issues.

Madam Antwi-Atsu noted that, coming after the UNCRPD, ADP takes into account the general comments and observations of the UNCRPD and that it builds on the rights enshrined in the UNCRPD and the Universal Declaration of Human Rights.

She described the Protocol’s language as disability-friendly, with a rights-based approach that is more descriptive and demonstrative to highlight the uniqueness of the African setting.

The ADP complements the African Charter on Human and Peoples’ Rights, going beyond the UNCRPD.