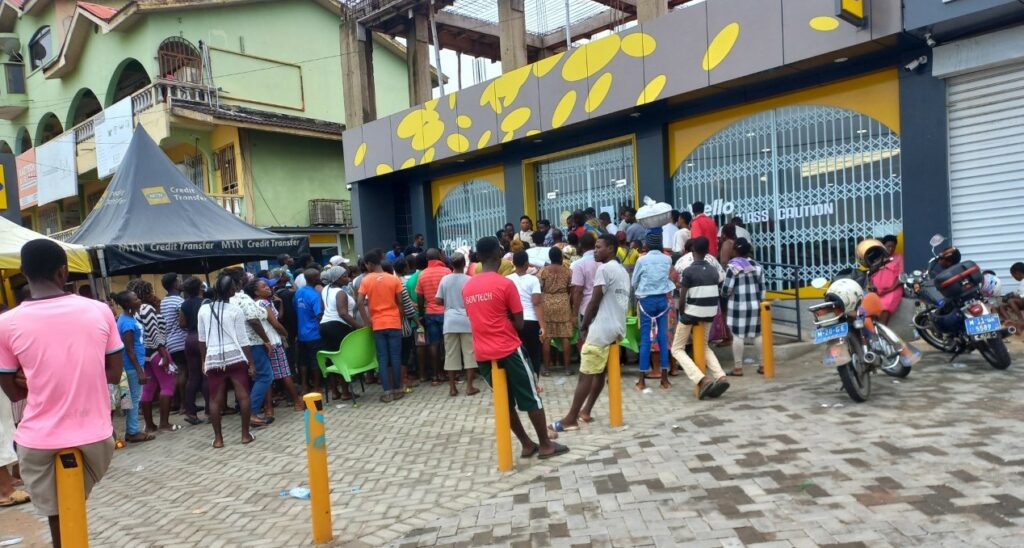 Some upset customers whose SIM cards and Momo accounts have been blocked since Thursday besiege MTN office at Darkuman Junction in Accra.

They said they could not access any of the services of MTN and were worried.

This comes after the Mrs Ursula Owusu-Ekuful, Minister of Communications, announced that all unregistered SIM cards will be deactivated by the November 30, 2022.

Some customers failed to meet the deadline, which was extended twice.

As at 0900 hours, when the Ghana News Agency ( GNA) visited the MTN office, it was crowded with customers demanding for it to be opened to them by the workers who had locked themselves in since they arrived to work.

A customer, who pleaded anonymity, alleged that some of the customers had been at the office as early as 0100 hours in the morning but the workers walked past them and entered the office.

She said some of the workers came out later and asked them to form a queue so they could attend to them but the customers refused because they suspected a mischief.

Another young customer said some of the workers who had come out today told them that nothing could be done about the blocked SIMs at that moment.

A police officer, who the GNA learned was detailed there, tried to control the crowd until another one who said he was from the headquarters when he addressed the crowd, arrived.

One of the workers came out to talk to the customers and assured that they would attend to those who wanted to obtain new SIM cards but issues of blocked SIMs would be dealt with on Monday, December 5, because the network was poor.

After the announcement, the policemen ensured that the customers were in a queue to be attended to.

The SIM cards registration is part of measures to reduce SIM-related fraud in the country.