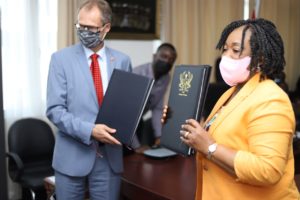 In a press release copied to ghanabusinessnews.com, the Swiss Embassy in Accra indicated that the agreement signed during a video conference in Accra, Ghana is the second agreement of its kind worldwide under the Paris Climate Accords (Paris Agreement). Switzerland, it said, had concluded a similar agreement with Peru on October 20, 2020.

According to the release, the Swiss authorities are by the agreement assuming responsibility in international climate policy and is also making a contribution to human rights.

“Under the Paris Agreement, Switzerland has committed itself to halving its greenhouse gas emissions by 2030 compared to 1990 levels,” the release said.

The agreement which will come into force at the beginning of next year and enables the implementation of climate protection projects such as the installation of several hundred thousand decentralized solar systems as part of the “Ghana National Clean Energy Program, the release said.

It also strengthens the expansion of renewable energies and energy-efficient technologies and thus reduces CO2 emissions in Ghana.

“This is particularly true in cooking – where efficiency means less wood and charcoal is burned – and in lighting, where solar and LED technology is replacing kerosene lamps and candles. In addition, the program will encourage small businesses to use medium-sized solar plants in place of diesel generators. Clear rules for the protection of the environment and human rights

The agreement obliges both parties to use a method that prevents double counting of achieved emission reductions. It also defines a clear framework for the international transfer of CO2 reductions and their recognition by Ghana and Switzerland,” it added.

Ghanaian teachers are among the best in the world – Dr Adutwum

Ghana’s Ambassador to Italy is dead

The Ministry of Foreign Affairs and Regional Integration, has announced the demise of Mrs Eudora …