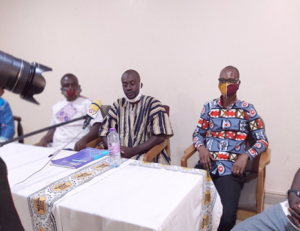 Senior Staff of public universities in Ghana have appealed to the government to take urgent steps to review their condition of service.

Mr. Abdul Majid Yussif, National Chairman of the Senior Staff Association (SSA), who made the call, said the Association intended not to disrupt academic work on the country’s universities, but would go all out to take any necessary action within the law, to ensure that members received what was due them.

Addressing a press conference in Kumasi on Saturday, he said government should take immediate steps to review its notes on the recently introduced market premium and non-basic allowances for public workers and include senior staff of public universities in the list of beneficiaries.

Mr Yussif pointed out that members of SSA did not understand why their colleagues in the civil and local government service have received market premium while they have been left behind.

He said the introduction of market premium had widened the gap and further impoverished the senior staff cadre of the public universities.

Mr Yussif was of the view that, most members of SSA possessed higher academic and professional qualifications which merited the said allowance, hence, the need for government to include them.

The Association, he said, had over 5,000 members representing about 85 per cent of the senior staff of public universities in Ghana.

He applauded the government for the reforms in the pension regime, and called for a second look at the pension scheme to reflect realities on the ground.

Mr. Yussif said information gathered by members of the Association indicated that the tier 2 pension deductions for staff of the various Universities between 2010 and 2016, had not been paid to the Fund Administrator (Petra Trust).

However, the first batch of retirees under the tier 2 Pension Scheme were due this year (July, 2020) and had no idea as to the process to follow to access their benefits.

“As a matter of urgency, we urge the government to release all outstanding funds to the Fund Administrator to enable them to initiate the payment process to our retiring members,” Mr Yussif echoed.

On migration of public universities payroll onto the Controller and Accountant General payroll, he stressed the need for a broader consultation before the migration process begun.

He appealed to the Chief Labour Officer and National Labour Commission to expedite action on releasing the Collective Bargaining Certificate to senior staff category of public universities, since SSA had fulfilled all requirements as stated in the Labour Act.