The Year-on-Year Inflation rate for January fell slightly to 7.8 percent from 7.9 percent recorded in December 2019.

Professor Samuel Kobina Annim, the Government Statistician, said the contribution of food to inflation had increased while that of housing fell during the period.

Alcoholic Beverages, Tobacco & Narcotics (11.1 per cent), Transport (10.5 per cent), and Housing (nine per cent) were the Divisions with the highest rates of inflation.

The Food and Non-alcoholic beverages Division recorded a year-on-year inflation rate of 7.8 percent, a 0.5 percentage points higher than 7.3 percent in December 2019.

The non-food year-on-year inflation for January stood at 7.9 percent.

Between December 2019 and January 2020, the price level of Food and Non-alcoholic beverages increased by 2.3 per cent, driven by an increase in price levels of Vegetables and Fish. 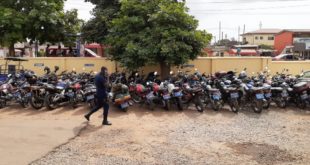 Ghana rosewood committee didn’t do justice to our findings – EIA