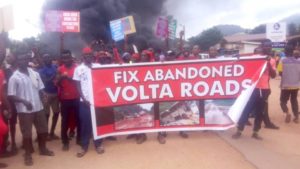 Residents of South Dayi District of the Volta Region have appealed to the government, to fix their roads to ensure rapid socio-economic development.

At a peaceful demonstration dubbed: “Fix abandoned Volta roads” the people, clad in red, took to the principal streets of Kpeve, the South Dayi District Capital, to drum home their plea.

He said the people deserved better roads to enhance their daily activities and improve their living standards.

Mr Rockson Nelson Etse Defeamekpor, the Member of Parliament for South Dayi, and Mrs Angela Oforiwa Alorwu-Tay, MP for Afadjato South, said though they had made numerous pleas to the authorities, nothing concrete had come out of it.

They said the nature of the roads made life unbearable for the people and called on the government to intervene.

The demonstrators held placards with inscriptions such as “Fix abandoned Volta roads now,” “The more you abandoned the road the more it becomes expensive,”  “Drivers are suffering,” and “Mr President honour your promise.”