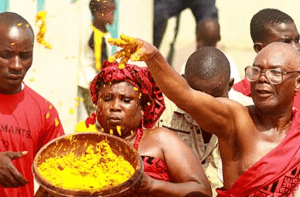 Gbetsoolor Nii Ashitey Akomfra III, Teshie Mantse, has launched the 2019 Teshie Homowo Festival with a call on the citizens to live in peace for the development of the area.

The festival, on the theme: “Hooting at Hunger, Striving for Excellence,” would commence from Monday, August 6 to Friday, October 25, 2019.

Among a number of activities lined up for the festival would be the launch of a GH¢ 500,000 social intervention project called Akro Foundation and would be funded with revenue from stool lands, bequests, grants, donations, gifts, investments and voluntary contributions from diverse sources.

The foundation would cater for the training and development of brilliant, but needy younger generations in approved basic, second cycle and tertiary institutions, to support government’s efforts in the provision of quality education.

“As I ascended to the Teshie Black Stool, I realised a sad decline in education standards and the concomitant danger of pushing Ga-Dangme languages and cultures into extinction. I decided to establish the foundation to help reserve the alarming situation as part of my modest efforts,” Gbetsoolor Ashitey Akomfra said.

He appealed to individuals and corporate entities, especially the telecommunication companies, to support the traditional authorities to raise funds for development.

He added that, three years ago, he led in the rebranding of the Teshie Homowo Festival in order to develop a new corporate image for the area.

“Today I am proud to announce that thanks to this innovative strategy, Teshie has celebrated subsequent Homowo in absolute peace and tranquillity. Now the era of stigmatisation by our leaders and other high profile personalities is gone forever. Teshie has now become a very attractive arena for development partners and businessmen,” he added.

He further called on Ga-Dangme indigenes, to stop fighting amongst themselves and rather help to protect and promote their rich culture for posterity.