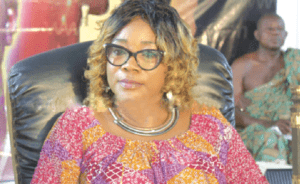 Mrs Cynthia Morrison, Member of Parliament (MP) for Agona West, has said government would continue to collaborate with transport unions and promote the welfare of drivers.

She said the government would also continue its dialogue with transport unions to enhance socio-economic advancement of the country.

Mrs Morrison, who is also the Minister for Gender, Children and Social Protection, said this when she met transport union executives at Agona Swedru in the Central Region.

The meeting was to discuss issues concerning the alleged fine of GH₵ 100 imposed by a taskforce formed by the transport unions and Agona West Assembly on drivers who picked passengers at unapproved points.

The arrests and imposition of the fine has created tension between some drivers and the executives of the Progressive Transport Owners Association (PROTOA), Ghana Private Road Transport Union (GPRTU) and Ghana Co-operative Transport Union.

The drivers, who were loading from unapproved points, claimed that the action was a deliberate attempt by the Agona West Assembly and the transport unions to use the taskforce to punish them.

But the MP allayed their fears, saying the Union executives have given tangible reasons for their action which was to help prevent the loss of passenger luggage and over speeding which happens as a result of competition among defaulting drivers.

Mrs Morrison urged the executives to collaborate with the Road Safety Commission, Motor Traffic and Department (MTTD) of the Ghana Police Service and other relevant agencies in the road sector to dedicate a whole week to educate the drivers on the issue.

This will help stop illegal loading at unapproved places to ease artificial traffic jams which occurs at Agona Swedru, particularly on Mondays and Thursdays which are market days.

She also appealed to drivers to desist from loading from unapproved places and join any union of their choice to bring sanity in the sector.

The government would ensure that drivers all over the country are protected and respected for quality and dignified living standards at all times to also ensure safety on the roads.

He expressed the hope that the road map given by the MP would be used to ensure sanity in the town, central business district of Agona Swedru, to promote traffic flow.

Mr Yaw Fayah, the Central Regional Chairman of PROTOA, said it was not their intention to punish any driver in the town but they must abide by the rules and regulations of the game.

He said driving is a noble profession but some drivers are tarnishing the image of the profession and the union executives would insist that that the right thing is done at all times.