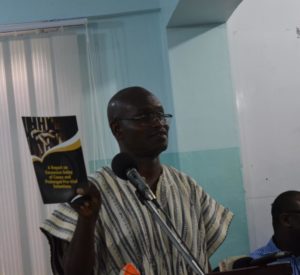 The Commonwealth Human Rights Initiative (CHRI) Report on “Turn-around Time in Criminal Justice Administration in Ghana” has recommended that the Ghana Bar Association (GBA) leads discussions on enacting and enforcing a Paralegal Act in Ghana.

The Report indicates that this would help improve access to justice delivery in the country.

A paralegal is an individual qualified by education, training or work experience, who is employed or retained by a lawyer, law office, corporation, governmental agency, or other entity who performs specifically delegated substantive legal work for which a lawyer is responsible.

The Executive Director of Legal Aid Commission, Alhassan Yahaya Seini who formally launched the Report in Accra, said in most instances people who were victims of prolonged pre-trial detentions were individuals who could not afford the lawyer’s services.

The Report discuses an evidence-based average turn-around time for cases referred by the police to the Attorney General’s (AG)Department, which will be used as an advocacy tool to support demands for improved case management structures to enhance justice delivery.

The document was based on monitoring exercise by CHRI, which took place in only 14 police stations in Accra and Kumasi, from January to June this 2018, to determine the average turn-around time for cases referred to the AG’s Department for advice.

Mr Seinin said for the people who found themselves in custody pending advice and trial, there was a lot of work to be done to ensure that the constitutional requirements of fair trial and expeditious justice within a reasonable period, for the people, was achieved.

He noted that this could not be achieved if the country only relied on lawyers to provide legal assistance to those who needed such services; adding; “We need to get people who are trained in the law, but not necessarily lawyers and as well capable of providing assistance”.

Mr Seini said it was possible to train non-lawyers to assist people to ensure that justice was not for only those who could afford.

The Head of Africa Office, CHRI, Ms Mina Mensah said, one of the factors that had contributed to the delay of cases was lack of coordinated communication between agencies precisely the Police, the AG Department and the Judiciary; and even with the case tracking system, which was being implemented, it was still not complete.

“For example if a suspect was supposed to go to court and the individual fails to appear several times, how would the judge know what is happening? In other jurisdictions if the suspect does not appear before the court, it would be triggered in the system”.

Ms Mensah said, CHRI decided to embark on the pilot project to track the cases at the level of the police stations, to find out where the dockets were, how many cases were in the system and how long it took for response to get back to the police for prosecution to start.

She noted that this informed the need to prepare a document to help change some of those points, whiles waiting for the case tracking system to be fully implemented.

A representative of the AG’s Department, Esi Dentaa Yankah said, the Department worked within standard operating procedures to ensure that the requisite attention was paid to every docket received.

She said the efficacy of those measures in ensuring speedy disposal of docket was, however, minimized by the problem of inadequate numbers of lawyers to handle the volume of dockets offered for review.

Others are problems of limited resources for the constrained attorneys at work, and by obstructive bureaucracy.

The Report recommended that the bureaucratic channels through which dockets were passed must be revised.

It suggested that there should be maximum cooperation and communication among the institutions and stakeholders involved in forwarding and reviewing of dockets along the various levels.

“More legal practitioners should be afforded the required training to supplement the increasing demand of legal services in the country,” it said.

The Report said official ways of using private communication channels like phone calls and emails should be structured to authorize their usage.