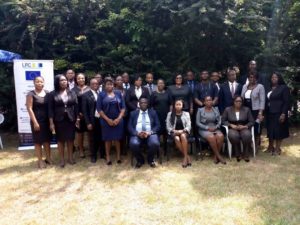 The Director of Judicial Training Institute (JTI), Justice Dennis Adjei has called judges and magistrates to ensure that the rights and welfare of children are protected when they appear before courts.

He said, in the process of taking evidence judges and magistrates must ensure that children are not intimidated in any form as such acts defeat the purpose of establishing the Children’s Act.

He said the Children’s Act was enacted largely in consonance with the Constitution to ensure the welfare of the child, hence going contrary to the provisions would imply that judges and magistrates have failed to live by what the Constitution enjoined them to do.

Mr Adjei said this in an interview with the Ghana News Agency (GNA) on the sidelines of a sensitization workshop for judges and magistrates on the role of security agencies in protecting the rights of children.

It was organised by the Legal Resources Centre (LRC), with support from the European Union (EU), under a project the Centre is implementing dubbed: “Justice for Children: Bridging the gap between Legislation and Practice”.

The workshop forms part of the LRC’s goal to influence national institutions to be more transparent, human rights-oriented, accountable and consistent with the broad outlook of Ghana’s Justice for Children Policy.

It also aims at bridging the gap between legislation and practice within the broad outlook of Ghana’s justice for children system ensuring that children in conflict with the law are adequately protected through targeted interventions including policy and legislative reforms.

Mr Adjei said, magistrates and judges could reject statements if investigations showed that the child was forced or beaten to give that evidence, hence it was not given voluntarily.

The Director said in that regard there was a need to sensitize the police, the Bureau of National Investigations (BNI), immigration officers and every security agency to ensure that taking evidence should be done in accordance with the Children’s Act.

“This provides that anything they do concerning a child must be geared towards the promotion of the welfare of children,” he added.

The Project Officer at LRC, Enoch Jengre, told the GNA that the Ministry of Gender, Children and Social Protection have drafted policies which it is trying to implement.

However, the LRC and EU decided to support the Ministry and other stakeholders in the justice delivery system to protect the rights of children in Ghana.

He said so far the Centre has trained officers from the Ghana Police Service, Ghana Prison Service and intends to train Immigration Officers in 2019.

A Magistrate at the Nkawkaw District Court and a participant, Abdul Razak Musah, said the challenge with regards to children/juveniles and law enforcement began with prosecution adding that most of the police officers at the juvenile courts were not lawyers.

He said it was inappropriate to handcuff children and juveniles but that was being done at the blind side of judges and magistrates.

Mr Musah said the workshop had enlightened them on some provisions of the Law, however, there would still be a challenge if prosecutors were not enlightened to understand what they were required to do.