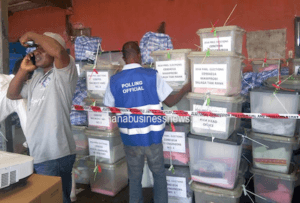 The Electoral Commission (EC) has declared the request for the creation of the  Bono East Region successful, based on the outcome of the referendum held in the area.

The declaration was made by Mr James Arthur Yeboah, the Returning Officer.

Four hundred and forty-eight thousand, five hundred and forty-five (448,545) out of the 450,812 voters, who turned out to vote in the referendum, said “Yes”, representing 99.5 per cent of the total votes cast.

There are 525,275 registered voters in the area and the turnout was 85.82 per cent, which was over and above the constitutional threshold of 50 per cent.