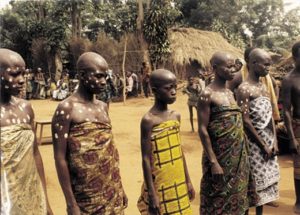 African scholars, with background in law and social issues, have called on leaders to help abolish negative cultural practices.

They said practices such as widowhood rites, succession laws, Polygamy, “Trokosi (females sent to shrines to atone for ancestral sins),” among others were against human rights and must be dealt with.

Dr Ruth Murambadoro of the Centre for Sexualities, AIDS and Gender-University of Pretoria, South Africa was reacting to an address delivered by Nana Dr Susubiribi Krobea Asante, Chairman at the opening of a socio-legal writing workshop in Accra on Thursday.

Dr Muramdadoro said those customary laws mostly enslaved women and they were violations of human rights but it was time they were eliminated.

Madam Suzzie Onyeka Oyakhire, lecturer at the University of Benin City, Nigeria agreed that those practices must be abolished but added that it should be done with tact so that it would not look like there was the use of foreign culture to abolish that of the African ones.

The Lecturer stated that there were laws and even judgements by the Supreme Court to abolish such traditions but all these had fell on deaf ears.

She called for education and provision of reasons that appeal to the emotions of the custodians on the need to do away with the negative ones or parts if that battle could be won.

She said many customs and traditions had lost the purpose for which they were accepted and followed by the initiators thus, currently; people are taking advantage of them.

Dr Nana Susubiribi, Chairman of GIALS and Paramount Chief of Asante-Asokore, in his keynote address, said the society was reflected in the law and therefore people must rely on the judiciary for the customary law to be administered.

He called for the return of lands which belonged to the indigenes but sold to foreigners, adding that land acquired for public use must be returned to its original owners if not used for the intended purpose.

“There is a constitutional provision which says that if a land is not used for the purpose for which it was acquired then provisions should be made for the land to be reversed,” he cited.

Nana Susubiribi also called for the abolishment of death penalties, saying liberal countries had all abolished that practice.

Professor John Harrington, a facilitator called on participants to learn to live with rejection when their write-ups were not accepted, adding that they should not let that deter them but be resilient as that was the only way they would make their work better.

Professor David Kershaw, a facilitator, urged the writers to structure their works in a way that would appeal to the public, topics must relate to the subject of journals and topics have to be globally appealing if they want their works published.

Cardiff Law and Global Justice as well as its partners including the Ghana Institute of Advanced Legal Studies (GIALS) organised it and had participants drawn from Ghana, Tanzania, Kenya, Nigeria, Zimbabwe and South Africa.

It is one of a series of writing workshops for socio-legal scholars in the global South and funded by the British Academy.

The session was for the participants to get feedback from their draft articles from other scholars to improve on their works and get them published in international journals.

This is to encourage Africans to tell their own stories to the rest of the world.