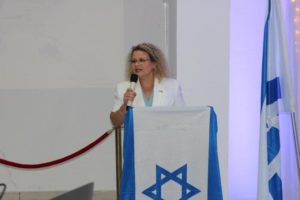 The Embassy of the State of Israel has opened its Trade and Economic Mission in Accra.

The purpose of the Trade and Economic Mission, which is Israel’s first in West Africa and the third in Africa, is to develop and enhance trade relations between Israel and Ghana, and the rest of the West African sub-region.

As official representatives of the Israel’s Ministry of Economy, the Trade and Economic Mission would also create and facilitate opportunities for business between Ghanaian and Israeli companies.

The Trade and Economic Mission was formally opened jointly by the Madam Shani Cooper, the Israeli Ambassador Designate to Ghana, and Dr Avraham Neguise, a Member of the Israeli Knesset.

The duo also laid a new cornerstone for the Israeli Embassy for Ghana, Liberia and Sierra Leone in Accra.

The Ambassador Designate said with regards to Israel’s friendship with Ghana, a process of closeness, flourishing and building of a mutually beneficial relationship has been developing over the past decades.

“Since the very first visit to Ghana of an Israeli official, former Foreign Minister Golda Meir in 1958, through former Foreign Minister Avigdor Liberman’s visit in 2009 and the consequent re-opening of our Diplomatic Mission in Ghana in 2011, and all the way to today’s times, we are enlightened to find ourselves where we are presently,” she said.

She said increased prioritisation of Israel’s relationship with Ghana had been marked by a series of historic events.

She cited the renewal and engagement of their Embassy, which carries along with it, increased activity and joint initiatives.

“Amongst others, we have furthered our ties with Ghana in the military field, attaining a peak with our last Counter-Terrorism Training; in the field of development through Israel’s Agency for International Development Cooperation (MASHAV) under the Israeli Ministry of Foreign Affairs; and between the people of Israel and the people of Ghana, through cultural activities.”

Madam Cooper said an additional significant aspect of the process of enlargement has been the opening of an Economic Mission in Accra.

“This is the only one of its kind in West Africa and it accounts as the third Israeli Economic Mission in the whole of Africa. This step comes to reflect the potential that we see in the development of the economic and trade ties between Israel and Ghana,” she said.

“In this context, the existence of the Israel-Ghana Chamber of Commerce, giving more leverage to the connection between Israeli and Ghanaian industries and companies. The Chamber is our partner and also acts as a multiplier factor to our efforts in the economic field.”

Dr Neguise said the opening of a Trade and Economic Mission of Israel in Ghana spells out a deeper and new beginning for the two nations; stating that the two nations have had a long term diplomatic and bilateral relations.

“Ghana was the first African country to establish diplomatic relationship with the State of Israel, the second state in Africa to have an Israeli Embassy and first African state to have a state visit by an Israeli former Foreign Minister Golda Meir in 1958,” he said.

He said 2011, the Israeli Embassy in Accra was re-opened to rekindle the relationship between the two nations.

Ms Ayelet Karp, Head, Israel Economic Mission in Ghana, said: “As the expansion and upgrading of the physical facilities of the new Embassy proceeds, it is only natural we celebrate the newly expanded efforts and expertise of the Economic Mission, dedicated to the strengthening economic ties between our two countries.”

Dr Gideon Amenyedor, Second Vice President, Ghana-Israel Business Chamber, said it is a moment of pride and happiness that the Trade and Economic Mission of Israel has been established in Accra.

He called for the support of the Chamber to the Trade and Economic Mission of Israel; declaring that “we look forward to working with you and your office to promote mutually beneficial economic interests of Israel in Ghana and of Ghana in Israel”.

Data breaches compromised 4.5 billion records in first half of 2018 – Gemalto