Togolese authorities have refused a gesture by the Ghana government to evacuate opposition politician, Nicodeme Ayao Habia who is on hunger strike in front of the country’s Embassy in Lomé for medical treatment in Accra.

A Togolese opposition politician, Jean-Pierre Fabre, revealed that Togolese authorities had prevented a plane sent by the Ghana government to evacuate Habia for care outside the country, from landing.

Confirming this revelation, the government, through the Minister of Security and Civil Protection, General Yark Damehame, said that Ghana has dispatched ‘a military plane’ to Togo to evacuate Habia but that the mission could not be accomplished.

Speaking on Victoire FM, a radio station in Lomé, Yark confirmed that the plane landed at the airport in Lome but could not take Habia because the authorities do not know the mission of the plane.

“Ghana is part of the facilitation but Togo is not a colony of Ghana,” he added.

The Minister stated further that Togo cannot send a plane to a city in Ghana to look for a patient without the Ghanaian authorities’ giving their consent. He also indicated that following the incident 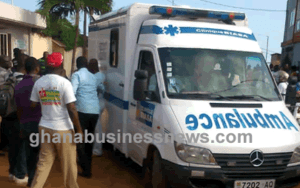 However efforts to get the version of Ghanaian authorities were unsuccessful as emails and messages sent to government officials were not responded to.

Togolese opposition groups have been calling for Togolese President Faure Gnassingbe to step down. They have embarked on nationwide public protests during which some 44 activists have been detained and some have gone into exile.

Habia has been protesting calling on President Akufo-Addo to prevail on Gnassingbe to respect the ECOWAS roadmap which was facilitated by the Ghanaian president.

Habia who has been on hunger strike in the past two weeks demanding the release of all political prisoners was advised to seek medical help as his condition was deteriorating. The former Member of Parliament and leader of the opposition ‘Les Democrates’ Party was on Tuesday convinced by some Parliamentarians and the pressure group Togo Debout to seek medical attention.

Habia agreed to be admitted into a private medical facility in the capital Lome, Biassa Clinic. But the ambulance that carried him instead drove towards the Aflao border heading towards Ghana with a convoy of motorcyclists and opposition actors. But the ambulance was refused exit from Togo as the border officials demanded to see authorisation from the Togolese authorities that permitted him to leave the country. After two hours of fruitless discussions with the border authorities, Habia was returned to Biassa Clinic where he is receiving treatment, awaiting clearance from the Togolese authorities for him to leave the country.

By Emmanuel K. Dogbevi with additional reporting by Carlos Amevor in Lome
Copyright ©2018 by Creative Imaginations Publicity
All rights reserved. This news item or any portion thereof may not be reproduced or used in any manner whatsoever without the express written permission of the publisher except for the use of brief quotations in reviews.