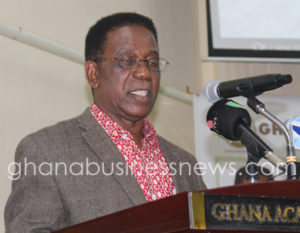 He said the educational benefits of the free SHS Double-Track Policy would benefit all segments of society.

“The policy is the way out, to take children off the streets and eventually enable them to be admitted into universities like the UPSA and other tertiary institutions,” Prof Yankah stated at the 10th Congregation of the University of Professional Studies, Accra (UPSA).

“Who knows how many Opoku Ampomahs (the founder of UPSA), Ghana would be losing if our sense of creativity eludes us at such critical moments in history,” he said.

“We should indeed rise to the occasion, and catch up with contemporary trends in optimization in the use of limited resources.”

He noted however that, even as the nation adjusts to the use of space to cope with numbers at SHS’s, there was the need to start the process of preparing the grounds for the influx of SHS students, who would be knocking on the doors of tertiary institutions in 2020, when the first batch of free SHS graduates get to the tertiary level.

The Congregation, which was chaired by Drolor Bosso Adamtey I, the Chancellor of the UPSA, saw total of 3,387 students graduating. Out of this number, 498 diplomates, 2,301 undergraduates and 588 postgraduate students.

Seventeen or 3.41 per cent of the diplomates attained Distinction, while 291 obtained credit and 190 obtained pass.

Prof Yankah said the Government considers the citizens of this country as the nation’s greatest assets and seeks to transform Ghana by transforming the quality of her human resource base.

He said quality education, which forms the foundation of a high quality human resource, was what the Government brings to Ghana’s long term vision; stating that, this would be achieved through the medium of education.

He assured that the Free SHS Policy had come to stay, and that, it would move into its second phase in a few weeks, when students admitted last year 2017, move to year two, and a new set of students get admitted and enrolled in year one.

“Having made a reference to the Free SHS policy, let me as well calm any anxieties about the current topical issue of the double-track enrollment policy, which is about to take off,” he said.

“This policy is no way a signal that the free SHS policy is in tatters, or been suddenly put in reverse gear,” the Minister added.

He said just as the free SHS policy, in its first year, enabled 90,000 extra students to go to High School, the double-track policy was meant to rescue some 180,000 students, whose educational future could be curtailed or jeopardized.

“The Government is simply saying these boys and girls are stranded; let’s be creative and rescue these kids at a critical part of their lives, let’s be compassionate, or else posterity will never
forgive us,” he said.

“Instead of using classrooms for only parts of the year, why don’t we optimize the use of space by teaching the first batch from September to December, and while the classrooms and other facilities
lie idle, another batch comes in to use it.

“It simply says, ’let’s not waste unutilized space, while kids are stranded; let’s use space wisely by taking turns to use the same space. Let’s optimize the use of space if for nothing at all, to save children otherwise lost at sea.”

He said this space adjustment policy was only temporary.

“It will be brought to an end when Government is able to catch up with infrastructure in the next few years. Thereafter, the normal rhythm of schooling will be restored.”

Prof Yankah congratulated the UPSA Founder, Mr Opoku Ampomah for his vision in establishing the institution.

He further lauded Prof Joshua Aiabi, immediate past Vice Chancellor, UPSA, for his visionary and transformational leadership, which had turned the fortunes of the University around.

Prof Abednego Feehi Okoe Amartey, the Vice-Chancellor, UPSA, in his report to the Congregation, said when he assumed office,  one of their top-most priorities was to develop a new strategic plan to replace the existing one which expired on August 20 l 7.

He said the new Strategic Plan offers a clear articulation of their vision for the next five years and would serve as a roadmap, as they sought to deliver excellence and position UPSA for future success.

He said the Strategic Plan outlines objectives and strategies, specific opportunities and ways to measure their progress.

He said the Plan would be subjected to constant objective reviews to establish its impact and maintain its relevance.

Prof Amartey said during the academic year under-review, the University established a Distance Learning School (DLS) with the mandate to plan and implement distance learning strategies and oversee its operations.

He said accordingly, the DLS had been tasked with the mission “to provide affordable, convenient and quality higher education opportunities to prospective students, who were motivated to be
self-directed learners but were constrained with time, space, distance or adequate material resources to access the conventional class meeting method”.

To the graduands, Prof Amartey said: “Wherever you will be in this world, I beseech you to uphold the values of integrity and professionalism. Be above reproach and take the moral high ground. Don’t let the noise of others stifle your silent inner voice.”

Dr Yossie Shevel, the President of Galilee InternationalManagement Institute, Israel, who was the guest of honour, said education plays a critical role in the socioeconomic transformation of
every nation.

He said the State of Israel had advanced because of education, adding that, the world was changing very fast, therefore, nations have to prepare themselves for it through education: