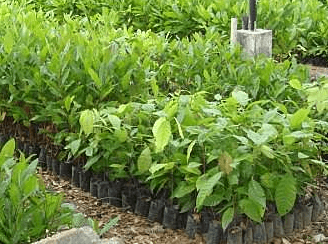 The Ghana Cocoa Board (COCOBOD) says it would introduce the use of organic fertilizer as a new soil enrichment strategy on cocoa farms.

Mr Joseph Boahen Aidoo, Chief Executive of COCOBOD said the use of chemicals and weedicides over the years had affected soil fertility and yield per acre –thus the urgent need to augment the soil’s fertility organically for higher yields.

Speaking to journalists after a tour of some cocoa growing districts in the Ashanti Region, he said COCOBOD would from August this year, embark on a massive programme to rehabilitate about 10,000 hectares of overaged cocoa farms that were yielding low pods per tree.

He said the rehabilitation programme, which was being supported by the African Development Bank, would also involve mass pruning.

Additionally, farmers would be encouraged to intercrop their cocoa plantations with various tree species of commercial value to refurbish and protect the degrading cocoa forest.

Mr Aidoo said as part of efforts to diversify the cocoa industry, COCOBOD was helping farmers to embark on on-farm bee-keeping as well as the cultivation of nutmeg alongside cocoa trees.

The CEO said efforts were being made to address all the challenges facing cocoa production in the country to reposition it well to continue to be the leading foreign exchange earner.

Mr. Aidoo said to boost cocoa consumption in the country, COCOBOD was collaborating with the Ministry of Gender, Children and Social Protection to include cocoa products in the School Feeding Programme to enable about 5.5 million children in public schools to enjoy hot cocoa, while also deriving its amazing nutritional benefits.

Some of the farmers expressed joy about the impressive results of the hand pollination and pruning programmes, which are helping to increase pod yield per tree in their farms and called for the intensification of the work of extension officers in cocoa farms.