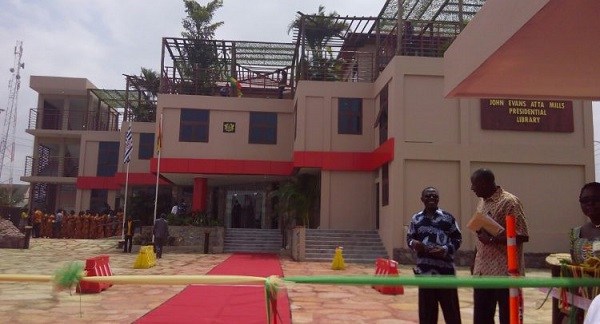 Following series of intense pressure mounted on the Committee which supervised the construction of Atta Mills Presidential Library, a crunch meeting has been held in Cape Coast on Monday to find a lasting solution to make the library operational.

Briefing an agitated youth at the forecourts of the Library after a closed door meeting, Professor Kwamena Ahwoi, a member of the Committee, assured the people of the Committee’s resolve to get the facility operational to serve its intended purpose.

Accompanied by Mr Totobi Quakyi, Mr Kwame Peprah, Kobby Acheampong and a host of others, the members held a lengthy discussion, an indication that the message by the youth had been effective.

The Cape Coast Development Association (CCYDA) has in recent times demanded accountability from the Committee.

Their demand was based on the fact that, the library built in honour of the late President, was fast deteriorating and losing its beauty after it was commissioned two years ago.

The deterioration had been compounded by its proximity to the sea, which was decomposing the metallic objects and air conditioners.

Prof Ahwoi denied rumour of financial mismanagement by the committee, saying: “After many years of my dedication and commitment to service as a civil servant, why would I do such a thing to tarnish my hard won reputation. I will never do that. I have not used any money meant for the construction works.”

Regardless of the explanation, the CCYDA organised a peaceful demonstration on Monday afternoon to register its displeasure and warned that it would not rest until the facility was opened.

The state of the art facility, had been closed because of the inability of the Committee to pay the contractors.

The Presidential Library, first of its kind in the country, comes with a 100-seater capacity auditorium, 45-seater multi-media centre, seminar rooms and a museum that holds historical materials that reflect the life and works of the late President.

It also has a museum, which would be stocked with documents, records, collections and historical materials of the late President and other industrious Africans, a conference facility, offices and a centre to host researchers.

The edifice, also has a virtual sound room that echoes the voice of Prof. Mills in his memorable speeches and images that bring to life his sojourn as a celebrated academician, keen sportsman, humble politician, devoted Christian, Servant leader, President and peace-loving Ghanaian.

It was inaugurated by former President John Dramani Mahama on Sunday, July 24, 2016 to promote academic research and generally improve education in the Metropolis and beyond.

Ghana has signed a $69.88 million renewable energy agreement to enhance electricity access in the …