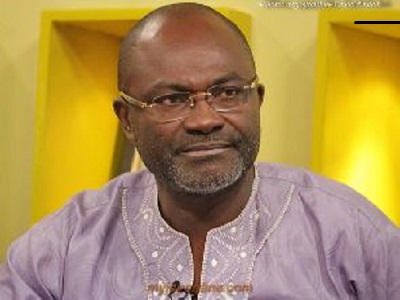 The Privileges Committee of Parliament has established contempt of Parliament against Mr Kennedy Ohene Agyapong, the MP for Assin Central, and recommended that he should be suspended for the rest of the current Session or be reprimanded.

“The Committee has carefully considered the matter in the light of the totality of the evidence gathered and in accordance with the provisions of the Constitution, the Standing Orders and other relevant enactments in accordance and concluded that the Member for Assin Central, Mr Kennedy Ohene Agyapong is indeed contempt of Parliament for the remarks he made that “Parliament is cheap’’ and “Parliament is useless”, a report of the Committee of Privileges, has said.

The Report, signed by Mr Joseph Osei-Owusu, First Deputy Speaker of Parliament and Chairman of the Committee of Privileges noted the apology rendered by Mr Agyapong.

It therefore did not consider expulsion as a sanction to be imposed; and the Committee was however in favour of either a reprimand or suspension.

“In view of the split ballot, the Committee recommends to the House to determine which of the two sanctions to be imposed on Mr Kennedy Agyapong.”

The recommendations followed an enquiry directed by Speaker Prof Aaron Michael Oquaye, when Alhaji Muntaka Mohammed-Mubarak, MP for Asawase drew the attention of the House to an alleged disparaging remarks  made by Mr Agyapong on Social Media to the effect  that the “House is useless and cheap and that if the House was not useless, it would not have Mr Osei Kyei-Mensah-Bonsu as its Majority Leader.

At the first public hearing, Mr Alexander Afenyo-Markin, counsel for the respondent raised a preliminary legal objection and brought the attention of the Committee that three Members of the Committee- Cynthia Morrison, Naana Eyiah and Samuel Nsow- Djan had applied to recuse themselves from further proceedings on the matter, pursuant to the Standing Order 164(4) of the House.

In the light of the request, the Committee ended public hearing and met in-camera to deliberate on whether or not the request by the three Members be accepted.

The Committee accepted the request by the three Members to disqualify themselves from any further proceedings by the Committee.

By a memorandum dated July 3, 2018, the Committee communicated its decision to the Speaker, and according Mr Yaw Buaben, Mr Yaw Afful and Nanan Akua Owusu Afriyie, all Members of Parliament were designated to act as Members of the Committee for the purpose of the proceedings with respect to the investigations of before the Committee.

According to the Report, the Committee held a second public hearing on Monday, July 23, 2018; and the video in which the alleged contemptuous comments were made played to the Respondent.

The Chairman informed the Respondent that the Committee wanted him to address the issue of “Parliament is cheap” and “Useless Parliament”.

“He explained that he made the statement “Parliament is cheap “out of extreme anger and therefore apologised for describing Parliament as cheap,” the Report said.

The Committee determined that the comments by Mr Agyapong was an affront to the dignity of Parliament and he was therefore guilty of contempt of Parliament in terms of Article 122 of the Constitution and Order 28 of the Standing Orders of the Parliament.