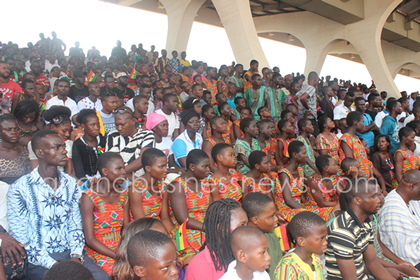 Malibban Population Network-Ghana (MAPnet Ghana), a Non- Governmental Organisation(NGO) oriented with population data collection and management has described the data on Ghana’s population growth, and data management as woefully inadequate and a threat to national security.

“MAPnet-Ghana would want to state emphatically that the country is insecure and not safe due to its poor population records. Most individuals do not inform the mandated department and agencies responsible for collecting bio-data for processing and management”.

This it said, had led to the situation where the government was not fed with the right information for proper decision making to aid the implementation of policies for the betterment of the country and therefore MAPnet was advocating and extending assistance to help clan heads/ Imams to register dead relatives.

The advocacy is among others to aid the deletion of names of dead relatives from the voter’s register.

Ms Mildred Mina Mintah, Executive Director of the NGO explained that Ghana needed to have a holistic population data of both the living and the dead with platforms for cross-checking real detailed information about persons in the country, upon request, to forestall all discrepancies in planning.

Ms Mintah who was speaking at a public forum on the population at Assin Anyinabrim indicated that population and related issues and had become a global concern especially in developing countries due to lack of corresponding qualitative growth in the lives of its people.

The forum brought together individuals and groups of diverse interests including heads of clans and Imams and their secretaries, Assembly Members as well as Unit Committee Members in the Assin South District.

The Executive Director, identified the challenges of population growth and lack of data on birth and death to include; little or no knowledge of the process, proximity of birth and death registration centres, access to family burial grounds among others.

Touching on the role of stakeholders to stem Ghana’s population growth, she lauded the pioneering role of traditional leaders who laid the foundation of togetherness and created platforms to share ideas, preach peace and recognise the need to work on common grounds to ensure development.

She underscored the need for traditional leaders to be abreast with up-to-date information of the population in their jurisdiction to significantly ease the challenges of development planning to stimulate economic growth.

She called for an increased awareness of traditional leaders on the effects of inadequate population data and information on development policies to get them actively engaged in decision making processes in order to be beneficiaries.

Additionally, she called on the government to resource the birth and death registry to enable it perform its constitutionally mandated duties under the Registration of the Birth and Death Act, 1965 (Act 301).

The Act, according to her, mandates that every child regardless of the district he is born in Ghana shall be registered by the Registrar in that district within twenty – one days after the date of birt

Ms Mintah stressed the need for all citizens especially families to support state institutions with timely information to enable them efficiently perform its roles.

Mr Francis Abban, Deputy Executive Director, called on the citizenry to own the registration process and report their dead relatives to the Births and Deaths Registry to be issued certificates that would among other benefits be used as evidence to expunge the names of dead relatives from the Voter’s Register.

This he argued could among others, save the country the cost of cleaning the Voter’s Register every four years and ease the Electoral Commission of that daunting task and also avoid the situation where aliens took advantage of  the country’s weak systems.

He noted that breeding of imposters and forging of personal bio data would be a thing of the past if stringent measures were put in place at every institutional level and appealed to the stakeholders, particularly the media to support the process by educating the public on the importance of the exercise.