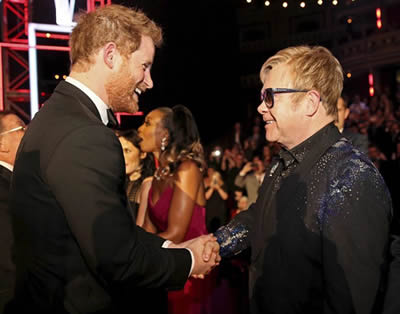 Singer Elton John and a Veteran AIDS Campaigner, has joined forces with Britain’s Prince Harry to launch a $1.2 billion initiative to “break the cycle”, of the MenStar Coalition of HIV transmission, targeting young men, among whom infections are on the rise.

The two noted that “Young people are the only age group where HIV infections are rising, not falling,” and called for action to end the lingering stigma around the virus and protect generations to come.

“We have to do much, much more to bring men, especially younger men more fully into the fold,” Elton John said.

The coalition brings together different partners, including the UNAIDS and the US President’s Emergency Plan For AIDS Relief Fund (PEPFAR) to ensure that young boys between the ages of 24- 35-year-old, accessed HIV testing and treatment.

The launch formed part of the ongoing 22 International Conference on AIDS in Amsterdam, Holland, organised by the International AIDS Society and its partners.

The five-day global conference is on the theme: “Breaking barriers, building bridges”.

It focuses on the major new investments, science-based policies and the political will needed to put the HIV response back on track.

About 18,000 participants are attending the conference, which provides the opportunity to strengthen policies, and programmes that ensure an evidence-informed response to the epidemic.

He explained that much work had been done to protect women and girls but “we can’t solve the whole problem if we are only addressing half the situation,” Elton John added.

“If we want to win this fight, if we want to end AIDS once and for all, we must make men part of the solution” and teach them to protect themselves, “not only their wives and girlfriends, their sisters, and daughters, but also critically their brothers and their sons.”

Prince Harry noted that the progress they have fought so hard for was at risk from a dangerous complacency.

“Too many around the world are still ignoring the damaging knock-on effects on education and other community services for not prioritising HIV prevention and treatment,” he noted.

The Duke of Sussex explained that the initiative would focus on “the tough but essential work of truly changing mind-sets.”

He urged people to unite around the “’smashing of a deadly stigma’ surrounding HIV, and the prejudice that is still there”.

South African actress Charlize Theron said: “We have come a long way as a global community from that moral panic that defined early stages of this epidemic,” she added.