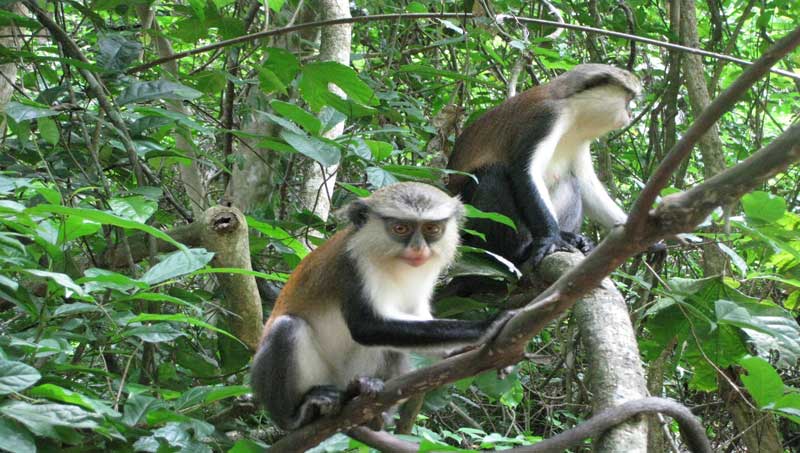 The Tafi Atome Monkey Sanctuary in the Afadzato South District is seeking support from investors to construct walkways, tree houses and other recreational facilities at the facility.

Mr Francis Acquaye, Manager of the site said the facilities would increase tourist’s stay time, and also increase the economic returns of the community by offering a variety of leisure activities.

He was speaking to the Ghana News Agency during a tour by travel writers and bloggers from across Africa as part of Weizo, an African tourism initiative organised by the African Travel Market in collaboration with the Ghana Tourism Authority.

Mr Acquaye said culture was a major attraction for tourists, as well as lessons in traditional plant medicine, and noted that the construction of walkways would enable further exploration of the sacred grove.

He said the community also reaped returns from homestay accommodation with over 60 rooms available, and was again hopeful that a facelift of the site would impact positively on their livelihoods.

Mr Acquaye said the primate population has grown to over 1,000, and live in clans of 100 to 120 monkeys, and appealed to stakeholders to help develop the place into a favourite tourist destination.

The Manager said the people of Tafi had been protecting the 387 hectare sacred grove which also served as a windbreak for over 800 years, after they had wandered for about half a century trying to locate the monkeys.

He said the forest also contained antelopes, squirrels, and pangolins among others, and was one of the few monkey sanctuaries in Africa which included; the Afi wildlife sanctuary in Nigeria.

Tafi Atome was fully recognised in 1993 when the Ghana Tourism Board, a coalition of NGOs, and the American Peace Corps came together to resource the site after a 1980 invasion by Christian missionaries who sought to destroy the sanctuary.

The grove was declared a tourist destination in 1996, and had since attracted thousands of visitors with proceeds benefitting the community.

Inaction of citizens, cause of flooding in communities-GNFS