Inaction of citizens, cause of flooding in communities-GNFS 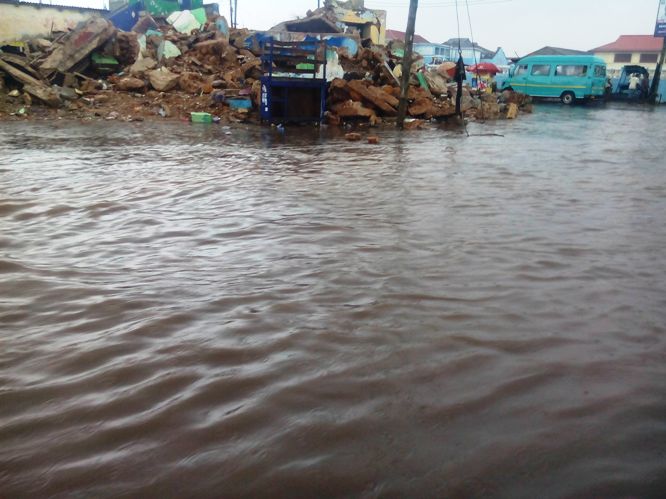 The indiscriminate dumping of refuse in water courses, building on water ways together with poor city planning have been cited as the major cause of flooding in many parts of the Sekondi/Takoradi Metropolitan Assembly.

The situation according to DCFO Semekor Fiadzo, the Deputy Chief Fire Officer in Charge of Rural Fire called for a collaborated efforts between the Town and Country Planning Department of the Assembly, the stool lands secretariat who lease such wetlands for development to ensure that the proper thing was done in land and building administration to avert loss of lives and property as a result of perennial flooding across the country.

The DCFO Fiadzo together with the Western Regional Fire Officer ACFO James Emmanuel Quao, DO1 Veronica Koney, the Deputy Regional Officer and Mr Patrick Kow Ocran, Head of the Rapid Response Unit of the STMA embarked on a field assessment of flood prone areas such as; Bakado, Appollo, Mankessim White house area and the market circle within the Metropolis.

The assessment was to enable the Rural Fire Director to acquit himself with the issues on the ground and how best the Service together with other stakeholders could handle the situation.

DCFO Fiadzo was worried about the rampant building on water ways, particularly around the Apollo and its environs which usually took fire fighters more than 12 hours to dispel such stagnant waters from people’s homes adding, “It is high time we resolved to do the right thing as a people”.

At Bakado and the market circle area, it was noticed that proper engineering works needed to be carried out to widen the flow of rain water in order to stop it from entering people’s homes.

The Director of Rural Fires therefore called on the media to also help with the campaign and education to the populace in ensuring a sanitised society where lives and property were secured no matter the amount of rains.