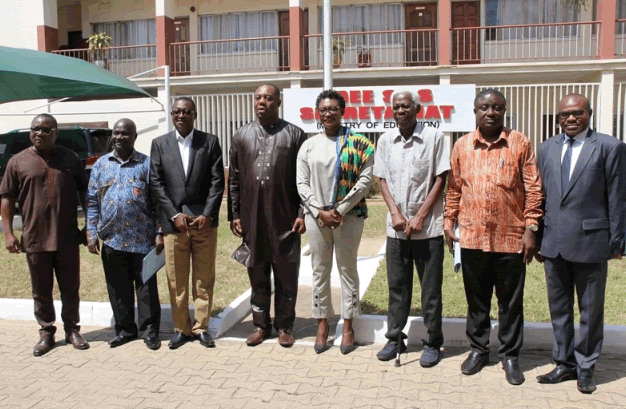 Dr Matthew Opoku Prempeh, Minister of Education, on Wednesday, inaugurated the Council for the National Film and Television Institute (NAFTI) in Accra, and tasked members to adopt the right approaches and practical interventions towards achieving excellence for the institution.

“Our desire, as a Government, is to empower future generations to achieve great heights in the quest for academic achievement and excellence in order to facilitate the transformation of Ghana through the creative and media arts industries,” he said.

The 10-member Council is responsible for the governance of the Institute by ensuring the attainment of its mandate, which is defined by Supreme Military Council Decree (SMCD) 151.

Dr Opoku Prempeh said the Government recognised the role of the film and television industry, and indeed the creative arts, in general, in  creating jobs and helping  to modernise the country, therefore, it was  determined to offer the sector all the needed support.

In this regard, the Government, he said, was currently considering the possibility of sourcing for funding to address some of these urgent infrastructural and equipment needs of NAFTI.

Madam Juliet Asante, an actress and film producer, who is the Government’s representative, is the Council’s Chairperson.

Others are Mr Daniel Owusu-Nyampong, representative of the Friedrich-Ebert Foundation; Mr Ernest Kofi Abbeyquaye of the Ghana Film Industry; Professor Kofi Agyekum, School of Performing Arts, University of Ghana; Mr George Oppong of the Centre for National Culture; and Mr Ivan Quashigah of the Association of Cinematographic Film Exhibitors and Directors.

However, the nomination of the representative of the Ghana Broadcasting Corporation is still pending.

Dr Opoku Prempeh reminded the Council members that they had been selected to serve on account of their proven integrity and sense of duty.

“It is my hope that you will bring these worthy attributes to bear in the discharge of the responsibility entrusted you,” he said.

He said the Governing Council was an important decision making body and it played a critical role in ensuring quality, efficiency and effectiveness in all institutions.

For many years, he said, NAFTI was under the supervision of the Ministry of Information; until it was migrated to the Ministry of Education in January 2017, where it was best suited to develop as an academic institution.

He said NAFTI had made and continued to make great strides despite the challenges it had faced.

Its graduates, he noted, were very well represented in the media industry today; stating that,  “They constitute the critical professional backbone of the film and television industries in Ghana as scriptwriters, directors, cinematographers and editors.

“In almost every television station or film production unit in Ghana today, one will find a NAFTI graduate performing one or more of these functions,” he said.

The Minister urged the newly constituted Board of Governors to give all their support to the management of NAFTI to continue to position the unique institute as the best higher educational institution for training in film and television and the media arts.

“I wish to assure you of the Ministry’s support to ensure that this Institution contributes significantly to the growth of the creative arts in Ghana and Africa as a whole,” he said.

The Government, he said,  recognised NAFTI as an academically viable tertiary institution with enormous economic benefits.

“In this respect, the Government’s strategy for NAFITI is geared towards infrastructural development and transforming the institute into a world class University of Film and Media Arts for the training of professionals for the ever growing creative and media industries.

“NAFTI is already evolving into a fully-fledged University and your role as members of the Board in this transition is critical.”

Dr Opoku Prempeh said the Government was committed to ensuring that NAFTI enjoyed the same attention that public tertiary institutions of higher learning enjoyed in Ghana.

He said the Ministry of Education had already received the NAFTI Bill and new Statutes for consideration by Parliament in that respect.

Speaking on behalf of the Council, Madam Asante expressed gratitude to the President for the honour done them.

She said the Council was committed to working with the Rector to carry out his very dedicated vision to transform NAFTI into the University of Media Arts.