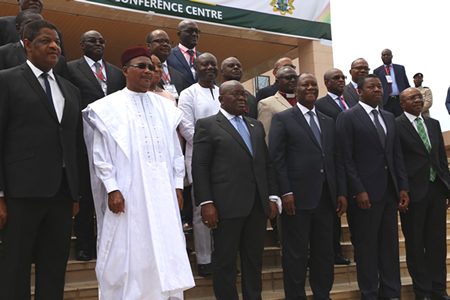 Members of the President Task Force on the ECOWAS Single Currency Programme have reaffirmed their political will to meet the Bloc’s single currency programme deadline by 2020.

They also reaffirmed their commitment to ratify and implement all relevant ECOWAS Protocols and Conventions, as well as the gradual approach where member states, which meet the convergence criteria, can start the monetary union while other countries join later.

This was in a Communiqué issued at the end of the Fifth Meeting of the Presidential task Force on the ECOWAS Single Currency Programme in Accra on Wednesday.

The members of the Task Force expressed concern over the situation in the Democratic Republic of Congo and called on the African Union to put in place a mechanism to move towards the peaceful resolution of the crisis.

The Accra meeting, which comes four months after the last one in Niamey, Niger on October 24, 2017, was to review the progress made by the Task Force, co-chaired by President Akufo-Addo and Nigerien leader Issoufou Mamadou, on the roadmap to attain the single currency for the region by 2020.