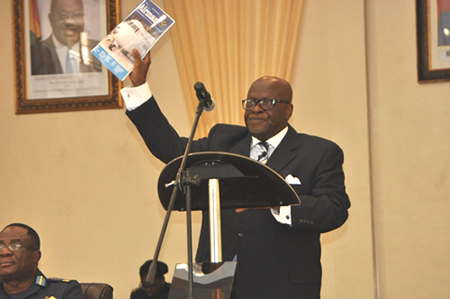 The Ghana Air Force has launched the maiden edition of the ‘’The Airman’’ Magazine to help educate the public and enable them have better understanding on the operations of the Air Force.

The 83-paged magazine is to educate, inform, entertain, and provide features articles on the history of the Air Force, roles, functions, structure and activities of the Air Force, goodwill messages from Service Chief Commanders.

It also contains articles on the Military, past chiefs of Air Staff (1959-2016), historical development of Aviation in the Gold Coast, the role of the Air Force in peacekeeping, and women with wings amongst others, towards the development of the nation.

Dr Vladmir Antwi-Danso, the Director of Academics Affairs of the Ghana Armed Forces Command and Staff College who reviewed the magazine said it had come at an opportune time to enable Servicemen and civilians to research into the activities of the Air Force.

He said the Airman had fulfilled all the necessary criteria to be accepted into the family of Magazines that serve good purposes adding that it would serve as a medium of telling the past, present and future occurrence of the Ghana Air Force.

He advised that in subsequent editions, the publishers should invite contributions and articles from the Academia not only to enrich the canvas of the magazine but also to widen its readership.

He therefore congratulated the Air Force for producing a wonderfully rich magazine.

Air Vice Marshal Mantsebi Tei Nagai, the Chief of Air Staff in his opening remarks said the Air Force being the youngest service in the Ghana Armed Forces, had taken a cue from the Senior Sister Services, the Army, and the Navy, who had produced ‘’The Soldier’’ and ‘’The Sailor‘’ Magazines respectively.

He said the idea to publish ‘’The Airman’’ magazine was conceived by past Chiefs of Air Staff and encouraged corporate bodies to submit articles and useful information for publication in subsequent editions.

Air Vice Marshal Nagai also encouraged corporate bodies to seize the opportunity to advertise their products in the ‘’The Airman’’ since the Magazine had the potential of a wide readership extending beyond the borders of Ghana as the Ghana Armed Forces operated in several peacekeeping missions and served in foreign missions as well.

Wg. Cdr Sogbodjor Rtd said the Ghana Air Force, conscious of the importance of the pubic to its operations, had found it expedient to provide knowledge-based information through the medium of the ‘’The Airman’’ for the consumption of both service personnel and the public.

‘’The maiden edition and subsequent ones, I believe, will serve as historical references which posterity will benefit from even when we are long gone. Having been an Airman, in the generic sense, before and now retired, I can appreciate better the importance of having the Air Force tell its own story’’, he said.