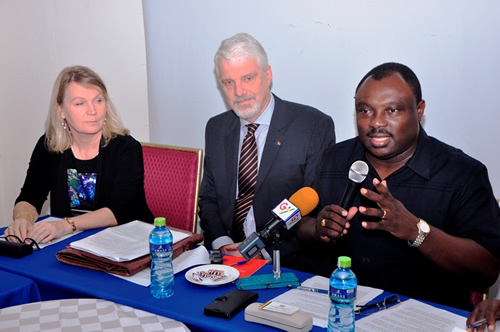 The joint Economic Partnership Agreement (EPA) between Ghana and the European Union on Wednesday in Accra started deliberations to adopt rules of procedures for effective implementation of the agreement.

The EPA was ratified by the Parliaments of Ghana, and the European Community and its Members in August and December 2016.

The agreement provides duty-free and quota-free access to all Ghana’s exports, agricultural or manufactured products to the EU market, while the country would gradually and partially liberalise imports from the EU.

Mr Carlos Ahenkorah, the Deputy Minister of Trade and Industry, said the importance of trade to the growth and development of any nation was critical because it had the potential of guaranteeing economic growth and lifting millions of people out of poverty.

Mr Ahenkorah said the EU was the leading destination of Ghana`s export consignments for traditional and non-traditional products such as cocoa, fruits, vegetables and processed fish and the largest provider of development assistance , and the biggest source of foreign direct investments.

According to the Minister, under the EU Trade Related Assistance and Quality Enabling Programme, agencies such as the Ghana Standards Authority, Food and Drugs Authority, the Council for Scientific and Industrial Research had been supplied with state-of-the-art laboratory equipment to facilitate the conduct of their analysis and research.

He said the work of the Joint Committee should enable both Contracting Parties to know the opportunities for investment and business expansion in both jurisdictions, and further appreciate the emerging policy and legislative changes that were vital to the survival of SMEs in the country.

He commended the EU to support the identification of capacity needs and the establishment of a Secretariat within EPA Governance at the Ministry, for effective implementation and monitoring of the Strategy.

“It is my expectation that the competence and rich expertise of members of the Joint EPA Committee will help mitigate ‘behind the border measures’ such as Rules of Origin, High Standards and Technical Barriers disguised as trade policy tools, which continue to restrict competition and hamper effective integration into the global value-chain”.

Mr William Hanna, the Head of European Union Delegation to Ghana, said both parties agreed to set up an appropriate mechanism of monitoring of the implementation of the agreement and also continued exchange papers with the proposal of each party on the agreement.

He said the EU was working with Ghana to further diversify and expand the country’s production and export capacity especially in the agriculture sector.

He said the EU was fully committed to supporting the strategy and providing a total of 12 million euro through the 11th European Development Fund to support its implementation.

Mr Hanna said the EU would submit a draft decision proposal for endorsement by the next EPA committee meeting, adding that the second meeting would take place in Brussels during the 1st quarter in 2019.