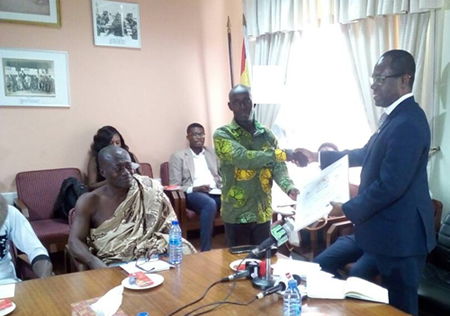 Three Ghanaian Cocoa farmers have been decorated with international award for quality, flavour and diversifying their cocoa products at the Porte De Versailles in Paris, France.

The farmers were presented with a certificate in recognition of their contributions to the cocoa industry.

Mr Joseph Boahen Aidoo, the Chief Executive Officer of COCOBOD presented a cheque of GH¢5,000 to each of the farmers and cocoa products for lifting the flag of the country high on the international ladder.

The awards was organised by the Bioversity International and Event International in partnership with some chocolate manufacturers at the Salon du Chocolate, from October 28 to November 1, 2017.

The event brought together leading sensory evaluation experts in the chocolate industry to evaluate, recognise and reward cocoa farmers with exceptional and unique flavours, while bringing know-how, market opportunities and incentives for safeguarding cocoa diversity to farming communities and national organisations globally.

He said key criteria for the assessment of cocoa quality include yield of cocoa nibs and flavour quality, which were mainly attained through the use of improved varieties of cocoa and proper handling of the harvest and post-harvest processes.

According the Mr Aidoo, the event created a platform Ghana and others to be recognised internationally as a producer of cocoa with exceptional and diverse quality.

He said the Cocoa Flavour Project at the Cocoa Research Institute of Ghana, jointly funded by COCOBOD, World Cocoa Foundation, USAID, TCHO Ventures with support from Guittard Chocolate played a significant role in winning the competition.

Mr Aidoo encouraged cocoa farmers to continue to create the awareness on the need to maintain good flavour and give off their best by maintaining the quality and good flavour of cocoa through good fermentation.

Mr Asiamah on behalf of the awardees thanked organisers and COCOBOD for the honour done them and pledged to pay attention to the advice given by  Extension Officers to improve upon their yields.