June 1, 2017 Africa/International Comments Off on Barclays PLC to sell shares in Barclays Africa 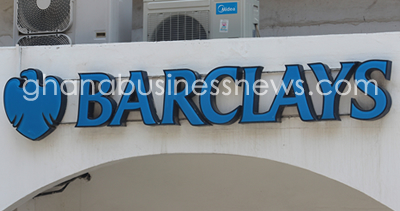 Barclays PLC has announced it will sell ordinary shares in Barclays Africa Group, according to a press release from the bank issued May 31, 2017 and copied to ghanabusinessnews.com.

The bank group indicated that this announcement of intention follows receipt of the required regulatory approvals, including approval from the South African Minister of Finance, for Barclays PLC to reduce its shareholding in Barclays Africa to below 50 per cent.

It noted that the sell-down transaction is in the form of an accelerated bookbuild, which has been activated, and is expected to be concluded overnight.

The conclusion of the sale is expected to be announced today Thursday, June 1, 2017.

The Barclays Africa group agreed to separate from the UK-based Barclays PLC. The move, was to allow Barclays Africa to operate as an independent pan African bank, and following that, Barclays PLC submitted an application to the South African Reserve Bank for approval to reduce its shareholding in Barclays Africa Group to below 50 per cent, Maria Ramos, the Chief Executive Officer (CEO) of Barclays Africa said at a press briefing February 23, 2017.