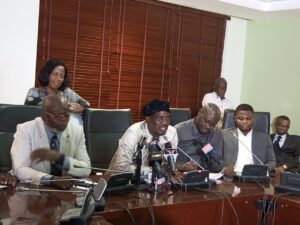 The Minority NDC Caucus in Parliament is set to embark on nationwide roadshows to foster a deeper understanding of the Debt Exchange Programme.

The Programme is a government initiative seeking to classify domestic bonds into four categories to create fiscal space as part of preparations to qualify Ghana for an International Monetary Fund facility.

Among other things, the roadshows would rally Ghanaians to demand a more favorable resolution to the alleged unprecedented economic crisis Vice President Mahamudu Bawumia-led Economic Management team has plunged the country into.

Addressing a press conference in Parliament, in Accra on Monday, Mr Haruna Iddrisu, the National Democratic Congress (NDC) Minority Leader, said: “The inclusion of individual bondholders in the Domestic Debt Exchange is the biggest transfer of funds from the pockets of Ghanaians to the government.”

“This will leave affected persons, mainly the middle class, improvised while worsening the plight of the poor. This must immediately be stopped.”

“We wish to take this opportunity to indicate our intention to embark on nationwide roadshows to foster a deeper understanding of this matter and rally Ghanaians to demand a more favorable resolution of the economic crisis….”

He, therefore, urged the President to engage in more comprehensive consultations on the matter with all stakeholders and the Ghanaian people.

Meanwhile, the Government on Monday announced an extension of the Debt Exchange Programme to Tuesday, January 31, 2023