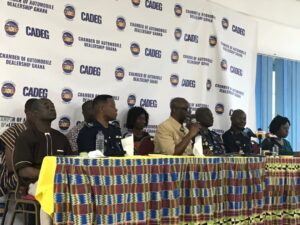 Dr Joseph Obeng, President of Ghana Union of Traders’ Associations (GUTA), has appealed to the Attorney-General and the Interpol International to find an international arbitration and legal system to help victims address the car stealing menace.

He said the move would also help the car dealers to retrieve the monies as they were mostly third-party buyers.

Dr Obeng made the appeal at the maiden stakeholder engagement organised by the leadership of the Chamber of Automobile Dealership Ghana (CADEG) in Accra.

Others are the Ghana Ports and Harbour Authority, Driver and Vehicle Licencing Authority, GUTA, and various Auto Dealerships.

He said there was also the need to find an effective mechanism that would help dealers to identify what stolen cars were and a system that would make stolen cars difficult to be shipped.

He urged all State actors to recognize the Chamber as a partner in national development and make the Chamber a first point of call on matters of their business, especially when incidence of stolen cars come into play.

“This will help the state institutions to understand the issues very well and be able to deal with it decisively,” he added.

He said crime wave was high globally, and criminal activities were sophisticated, hence the need for State and Non-State actors to collaborate effectively to be able to identify the various modus operandi of criminal operations.

The President of GUTA said by doing so they could share with governments all over the world, to be able to establish criteria for identifying stolen goods and intercept them at the country of origin and/or before it gets to the destination.

“Information on these criteria should be widely disseminated for people to know, detect and report any suspected case to security agencies,” he said.

Mr Dumenu George, Secretary of CADEG, said on December 9, 2022, the Economic and Organized Crime Office in collaboration with the Federal Bureau of Investigation and the Royal Canadian Mounted Police raided a number of used auto dealerships (garages).

He said they retrieved several imported luxury vehicles suspected to have been stolen from the United States of America and Canada.

The Secretary said EOCO in a statement on December 13, 2022, said the various specifications of luxury vehicles were retrieved from some garages in Accra in an intelligence-led operation in tandem with the above-mentioned security agencies.

This stakeholder engagement has become imperative due to the recent raid mentioned earlier, subsequent arrest and harassment of some owners of these dealerships.

“We would like to seek clarity as to at what point an imported vehicle is ascribed to be ‘stolen,’” he added.

He said the Chamber was of the view that these inspectorate agencies were required to verify all these vehicles, their requisite documents, and approve the same before we are allowed to pay huge import taxes to the state.

He said it was a surprise that these vehicles after going through all these checks are now tagged as “stolen vehicles.”

“In our opinion, the majority of these cars are actually not stolen cars as it is being alleged,” he said.

Mr Dumenu said was it possible that an ordinary Ghanaian importer could outwit the inspectorate agencies of developed countries like the USA and Canada, indicating that the checks and balances in these countries were so strict that an ordinary trader from Ghana did not have the sophistication needed to perpetrate such a crime easily.

He said the Chamber wanted to get clarity on the foregoing to enable it to educate its members and their customers and the public to enable them to avert such an unfortunate incident which occurred on Friday December 9, 2022, from reoccurring.

He said the raid had serious consequences for their business in the used auto dealership in Ghana by creating a huge mistrust between purchasers of used vehicles in their dealerships.

AC Eric Kwaku Bonney, Sector Commander at Headquarters of the Customs Division of the GRA, said the Division was equipped to carry out vehicle examination effectively.

He said currently criminals had formed major cartels and were stealing vehicles to sell to the auto dealerships overseas.

He urged the Chamber to educate their members to always do due diligence before they ship their cars into the country.