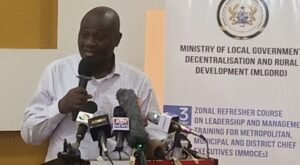 Mr Dan Botwe, Minister of Local Government, Decentralisation and Rural Development has urged citizens of Bawku in the Upper East Region not to allow conflict to dictate the pace of life in the area.

He said healthcare delivery, access to education, agriculture and socioeconomic activities were at the lowest end in Bawku, leading to loss of lives, properties and compelled many to flee due to the protracted chieftaincy dispute.

“The guns must be silenced, and cool heads must prevail for the restoration of normal social life and peaceful coexistence.

“We cannot allow criminals and conflict profiteers among our ranks to destabilise the peace of the area and dictate the pace of life of the vulnerable. Criminals should be viewed and treated as such from both sides,” he said.

Speaking at the 35th annual Samanpiid festival of the chiefs and people of the Kusaug Traditional Area, Mr Botwe said it required the shared responsibility of all stakeholders to restore peace in Bawku to achieve the needed development.

He said the theme for this year’s celebration, “Building Peace: The role of all Stakeholders” was apt considering the reemergence of the conflict and said all residents and stakeholders had roles to play individually and collectively to attain lasting peace in Bawku.

The Minister underscored the urgent need for stakeholders especially factions in the conflict to use social interaction to complement each other’s efforts to avoid and condemn conflicts at all levels to promote respect for human rights and dignity, social justice, and rule of law.

“I wish to passionately appeal through our revered king (Bawku Naba) to urge our brothers, Kusaasis, to return to the Bawku Interethnic Peace Committee to facilitate dialogue among you and our brothers on the other side on the way out of this crisis,” he added.

He reiterated the resolve of government to continue to engage all relevant stakeholders to achieve lasting peace and restore the lost glory of Bawku of economic prosperity.

Mr Cletus Avoka, Member of Parliament for Zebilla Constituency who spoke on behalf of all the six MPs of Kusaug Traditional Area including Bawku, Zebilla, Tempane, Garu, Pusiga and Binduri, said conflict had destroyed the reputation Bawku once held as the life and commercial business centre of the Upper East Region and Ghana.

Mr Avoka noted that the government and other stakeholders had made efforts to ensuring peace in Bawku, but the situation remained the same, and worsened by the day and added that the strict stands by factions in the conflict did not help to resolve the issue.

He said the conflict was retarding development of the area as projects implementation in the area had been stalled including those working on the main Bolgatanga-Bawku-Pulmakom road as contractors were afraid to work there.

“Many of the homes are empty, young men and women and business people are all vacating Bawku and that is a sorry sight. Education, business, and healthcare are declining, if not at a standstill and so we have the collective responsibility to make sure we have peace in Bawku,” he said.

Zugraan Asigri Abugrago Azoka II, Paramount Chief of Kusaug Traditional Area, through a speech read on his behalf, commended government for the efforts made so far to restore peace and underscored the need to expedite actions to achieve lasting peace for sustained development.

The great refugee fraud in Cameroon