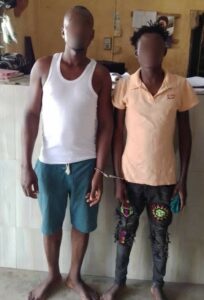 The Police have arrested three suspects for their alleged involvement in a Mobile Money robbery at Kasoa, in the Awutu Senya East District of the Central Region.

However, one of the suspects, Godfred Okine, after his arrest, later complained of ill health and was rushed to the hospital, but died while receiving medical attention, according to an official media release.

The body of Okine has been deposited at the Police Hospital morgue for preservation and autopsy.

The Police explained that the suspects, Michael Otu, alias “Rider”, Godfred Okine and Asaa Faisal alias “Commander”, armed with a pump-action gun concealed in a baby diaper sack, allegedly attacked and shot a mobile money merchant, at his business centre.

The injured victim is in a stable condition receiving medical treatment.

The release said efforts were underway to arrest one other suspect who was on the run.

Michael Otu and Asaa Faisal were put before the Ofaakor District Court on Thursday, December 29, 2022, and were remanded into Police custody to reappear in court on January 12, 2023.