Assin Akweteykrom No.2 gets rice mill from Canadian government 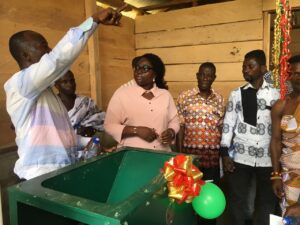 Assin Akweteykrom Number Two (AANo.2) in the Assin South District of the Central Region has received support from the Canadian Government to help in large scale production of rice in Ghana.

Five groups of women Farmer Based Organisations (FBO) in AANo.2 came together to form the ‘Onua Do’ group to benefit from a Rice Mill project for effective results.

The Canadian government provided an amount of GH¢50.000.00 to complete the Mill which had brought relief to the women farmers in the District.

Mrs Felicia Ntrakwa Amissah, District Chief Executive (DCE) of Assin South District who commissioned the project thanked the Canadian government for the gesture which will not only boost rice production but also lessen the burden of women who had to travel long distances to get their rice milled after harvesting.

The DCE charged the group to handle the equipment with maximum attention and not feel reluctant to do periodic servicing to prolong its life span.

Mrs. Agnes Tetteh, leader of the ‘Onua Do’ group who received the keys expressed appreciation to the Canadian government, saying the project will spur them on to plant more rice in the coming years.

Mr. John Tawiah Aidoo, the Assin South District Director of Agriculture revealed that the Canadian government had earlier donated three harvesters to the group to boost rice production in the area.

He was excited that the women had finally breathed a sigh of relief from that intervention.