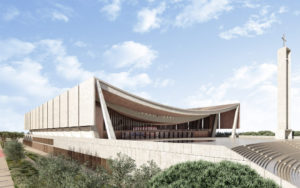 The National Democratic Congress (NDC) Parliamentary Minority Caucus on the House’ Select Committee on Trade, Industry and Tourism, has by a majority vote, rejected the GH¢80.00 million budgetary allocation in the 2023 Budget for the National Cathedral Project.

Mr Yusif Sulemana, Deputy Ranking Member for Parliament Select Committee on Trade, Industry and Tourism, and NDC Member of Parliament (MP) for Bole, announced this to the Parliamentary Press Corps at Parliament House, in Accra.

He noted that the report on the issue of the GH¢80.00 million for the National Cathedral Project would now be brought to the floor of the House for consideration and that the Leadership of NDC Minority was solidly behind them.

“We have voted against it and we are saying that this is not the time for us to be spending that huge sum of money on building a Cathedral,” Mr Sulemana said.

He said they were not satisfied with the explanation on how the GH¢339 million was spent on the project.

He noted that Committee was informed that the Government had now placed the Cathedral Project under Ministry of Tourism, Arts and Culture

“And the question I put to them was that, that organisation that is handling this Cathedral, the Secretariat, is it under the Ministry of Tourism?”

He reiterated that NDC Minority was not against the Ministry of Tourism’s budget.

The National Cathedral is a historic project that provides a sacred space and infrastructure for the formal religious activities of the nation, like state funerals and presidential inaugural services, according to its Secretariat.

It is this national character that distinguishes it from the other Cathedrals in the country.

It is a vision of the President for a Sacred National infrastructure, linking it to the path-breaking design of iconic Architect Sir David Adjaye OBE, and organically anchoring these in world-class programmes, according to the Secretariat.