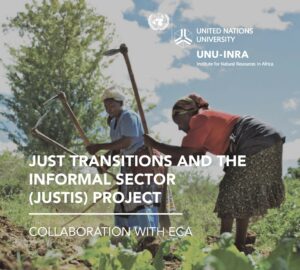 In two days, December 20 and 21, 2022, a conversation about energy transition and the informal sector in Ghana has been had. Considering that in the entire Africa and in Ghana, the informal sector contributes about 85 per cent to the economy, its importance and relevance to driving the overall energy debate can’t be over-emphasised.

At the two-day workshop organised by the United Nations University Institute for Natural Resources in Africa (UNU-INRA) in Accra, the discussions on energy transition has not only highlighted the challenges and needs, but also opportunities to harness renewable energy to enhance economic activities and quality of life.

During the workshop, policymakers, academics, NGOs and entrepreneurs met to brainstorm, share ideas and figure out a way around how to fully pursue the objectives of achieving efficiently, and exploiting the full benefits of attaining energy transition for business and living.

Dr Fatima Denton, the Director of UNU-INRA, in her remarks called for efforts to understand Africa’s stranded assets, such as hydrocarbon resources. She said if these resources become stranded, they lose their value.

Dr Denton urged that it is necessary to understand the “importance of the informal sector. If we don’t understand their transition needs, the injustice of it, and if we don’t address the issue of injustice, we would have problems of transition.”

She made a comparison of the carbon emission of a country like Rwanda with some of the major polluters in the world, and pointed out the injustices and inbalances, and the necessity of bringing the informal sector into transition.

“Their needs in terms of supply chain. How we grow their relevant skills and tools. The Informal sector is an innovation hub,” she said.

Dr Hilda Mwakatumbula of the Economic Commission for Africa (ECA) said Africa must be at the centre and play an important role in the transition through extensive dialogue on how to take the “steering wheel and not let other people decide for us.”

During the workshop, the UNU-INRA launched its project, the Just Energy Transition in the Informal Sector (JUSTIS) portal.

According to the Institute, the inspiration for JUSTIS stems from the pressing need to mitigate the impacts of climate change on Africa, through an energy transition while ensuring that the impacts of the transition does not create a scenario where some are more likely to benefit from a Green transition than others.

“In this UNU-INRA and the United Nations Economic Commission for Africa created JUSTIS to explore how the events of asset stranding of hydrocarbon products will affect workers in the informal sector, and how targeted policy intervention and private sector support can help grow the green economy in a sustainable manner,” it said.

Among other things, the Institute notes the urgency to mitigate the catastrophic impacts of climate change as necessitating a rapid transition from fossil-based energy systems to clean, low to zero-carbon energy sources.

It believes that without specific efforts to ensure an equitable transition, existing injustices in the current energy systems will be exacerbated, resulting in winners and losers.

It argues further that in Africa, a poorly managed transition would impact the informal sector, especially youth and women, noting that the informal sector is a significant backbone of the African economy, providing a vital source of livelihood and income opportunities.

It also observed that across Africa, the informal sector has demonstrated leadership in response to climate change and the low-carbon transition than the formal sector by leading several renewable and clean energy innovations. Informal workers engaged in the green energy space are expanding the footprint of renewables and disrupting traditional energy models, it added.

The UNU-INRA points out that there is, minimal reference to the informal sector in the green transition discussions and interventions.

However, accelerating the transition and achieving an inclusive and equitable green transition will be hampered if the informal sector’s contribution remains neglected,” it added.

The second day of the workshop brought together mostly entrepreneurs in the renewable energy sector to brainstorm and share ideas.