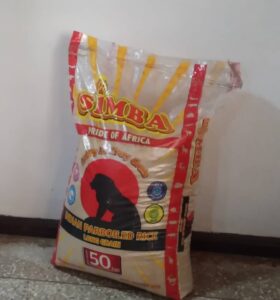 The Volta Regional Office of the Food and Drug Authority (FDA) in collaboration with the Custom Division of the Ghana Revenue Authority (GRA) and Ghana Standard Authority have intercepted imported India rice suspected to contain lead.

The brand of rice, ‘Simba’ Rice, which is unwholesome for consumption, was impounded at the customs duty yard at Aflao Border in the Volta Region on November 14, 2022.

Mr Gordon Akurugu, the Volta Regional Head of the FDA, briefing the media said 22 bags of the rice were impounded as a result of enhanced surveillance operations by the Authority, following an alert issued by the Ministry of National Security regarding the rice on May 16, 2022.

He said the Ministry of National Security issued the alert following the interception of the brand of the rice by the Nigerian Customs Authority, of which one thousand (1,000) sampled contained lead residue on May 5, 2022.

Mr. Akurugu said further investigations and interrogation with the traders involved revealed that the suspected rice was being offered for sale at a very low price in Togo, and that it was an indicator that Ghana was the next targeted destination.

Mr Akurugu disclosed that an alert had been sent to the neighbouring borders and the patrol teams to keep high surveillance to prevent the rice into the country due to its food safety implications on the citizens.

He commended the National Intelligence Bureau, National Security, Military Intelligence, Ghana Immigration Service, National Narcotic Commission, and the Customs Division of the GRA for their effective collaboration and vigilance in safeguarding public safety.

Mr Akurugu further disclosed that his outfit carried out a market surveillance at some supermarkets and cold storage facilities in the Region on two brands of frozen poultry sausage linked to an outbreak of listeriosis in Italy between October 4 and 5, 2022.

“The activity was necessitated following an FSN alert that all AIA Wudy and Pavo brands of frozen poultry sausage with dates until November 30, 2022, were affected.”

Mr Akurugu said the facilities visited were inspected and records of them were also reviewed to ascertain the delivery or purchase of the implicated product.

He said the exercise did not establish the presence of AIA Wudy Sausage on the market, however, the existence of the Pavo brand was established and that further investigation was ongoing to get the supplier of the implicated product.

Mr. Akurugu urged the public to be vigilant about their consumption patterns, especially during this festive season, stressing that the health of the public was their priority.