Simba roars from his den at the Achimota forest 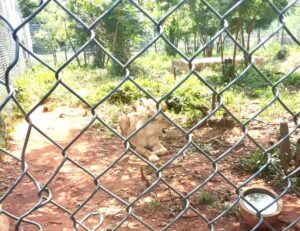 Simba and Lala roared as they watched humans from their secured den. Their cubs jumped and played unperturbed, savouring their childhood innocence in the Accra Zoo, housed in the encroached Achimota Forest.

On a quiet Sunday morning, three months ago, for some strange reasons, a middle-aged man was found mauled to death by in the lions’ enclave, leading to the closure of the zoo.

The yet-to-be identified man met his untimely death after he had allegedly sneaked and jumped into the den of the lions at about 1230 hours. The accounts leading to his death remain speculative and rumours abound in Accra about the incident.

Reports say that the man allegedly sneaked and jumped into the den of the lions at about 1230 hours, after which the lion attacked and killed him. Guards at the Zoo found his lifeless body when they sent food to the lions.

This unfortunate incident led to the temporary closure of the Zoo on Tuesday, August 30, 2022, to allow for investigations and refitting.

These improvements include the installation of electricity power supply to the Zoo, installation of Close Circuit Television Cameras (CCTV) and camera traps at the Zoo, and especially the lions’ enclosure to detect the movement of objects and persons within the area and enhance surveillance.

The authorities have mounted security check points close to the lions’ enclosure for constant monitoring; enhancement of the enclosure to be more robust with the addition of a third outer perimeter security fence of five metres high.

They have also provided directional signages to allow visitors to know their bearings at the Zoo; constructed new receptive facilities and improved existing washroom facilities for the comfort of visitors.

Old and dilapidated animal cages have been renovated and a tagging system has been put in place for all visitors to the Zoo.

The reopening ceremony was graced by over 200 people made up of staff from the Ministry of Lands and Natural Resources, personnel from the Forestry Commission, Policemen and women, School children within Achimota and its environs.

It was performed by Mr Samuel Abu Jinapor, Minister of Lands and Natural Resources, after which he toured the Zoo and inspected the Lions’ enclosure together with his entourage.

The school children who graced the occasion were excited as their faces were lit up with gladness and anticipation for the tour around the Zoo.

For them, it was an opportunity not only to enjoy some leisure away from their tedious academic work but to also feast their eyes on the wild animals.

The tour ended with a visit to the much talked about Lions’ enclosure where the incident occurred.

The lions, who had not anticipated the visit, occasionally registered their displeasure with roars and growls.

The rude reception by the lions sent chills of fear down the spine of many, however, they lingered on determined to enjoy every bit of adventure the moment offered.

The lions’ enclosure within the Accra Zoo is made up of four lions-two adults and two cubs.

The adults are nicknamed “Simba” (male) and “Nala” (female) after the characters in the “Lion King” movie.

The cubs, also male and female are a year and a month old each.

Simba’s natural instincts are still sharp as he made a statement to the visitors that he is not a character in a fable but a real king in a little space in a human made enclave now heavily protected against human intrusion.

Sale of aphrodisiac, body enlargers on the rise in Bolgatanga market