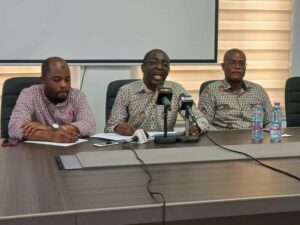 The Technical University Teachers Association of Ghana (TUTAG), has served notice that it will embark on strike if the government fails to address some unresolved issues affecting its members within 10 days.

The Association is worried about the government’s failure to, among other things, comply with rulings of the National Labour Commission (NLC) to pay certain allowances to its members and would not accept any further delays.

“We wish to inform government that the National Executive of TUTAG has been stretched to its end to the unresolved issues and would therefore not be able to guarantee industrial harmony on the various campuses,” Professor Collins Ameyaw, President of TUTAG cautioned at a news conference in Kumasi.

He said government’s disregard for the rulings of the NLC on the codified Conditions of Service (CoS) for members of TUTAG which had been outstanding since 2016 was worrying.

He also bemoaned the reluctance on the part of the NLC to enforce its own ruling against the government, saying that, TUTAG had patiently engaged government amidst a feet-dragging posture on its part.

He said the NLC on September 02, 2022 ruled that the effective date of payment of the Internally Generated Fund (IGF) component of the allowances should be August 2021, as negotiated and agreed by the parties.

The same ruling also directed the Minister of Finance (MoF) to ensure payment by issuing the necessary letters to the various University Councils within a reasonable time to make budgetary provisions in the budget, he stated.

Subsequent to these rulings, he said, TUTAG had endured several processes expected to culminate into the Ministry of Finance issuing an authorisation letter to the Universities to effect payment.

“Unfortunately, despite numerous follow-ups the MoF has not shown any commitment to issue the letter to the Universities,” he complained.

He said TUTAG members had invariably been denied their appropriate benefits within the scope of the reviewed IGF-related conditions of service.

Another worrying observation by TUTAG, he noted, was the attitude of Vice Chancellors of Technical Universities in the matter of conditions of service of the Association.

He said TUTAG had picked intelligence that the Vice Chancellors were in backdoor negotiation with some government agencies to defer the effective date of IGF-related conditions of service to January, 2023 instead of August, 2021.

“We wish to state that the actions of the Vice Chancellors amount to unfair labour practice, especially when we have concluded negotiations on the allowances in question”, he pointed out.

He urged the Vice Chancellors to desist from such interference in the work of TUTAG to ensure industrial harmony on various campuses.