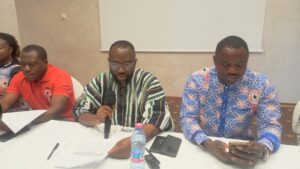 The Ghana Medical Association (GMA) has advocated the decentralisation of post-graduate medical education as a long-term measure to resolving poor and inequitable distribution of medical doctors and other critical staff across the country.

It proposed that government, through the Ministry of Health, empowered its agencies to establish at least a medical school in each of the 16 regions of Ghana.

This, it said, would not only afford many people in deprived communities the opportunity to pursue medicine, help increase the number of doctors in the country and serve their communities but would help retain doctors in underserved regions.

Dr Frank Serebour, the President of the GMA made the proposal on behalf of the Association at a news conference in Bolgatanga in the Upper East Region at the end of its Annual General Conference.

The conference was on the theme, “addressing the doctor distribution dilemma: the case of Ghana and its underserved areas.”

Dr Serebour noted that although Ghana made tremendous progress with regards to the doctor to population ratio from one to 17,899 in 2005 to one to 6,500 in 2020, it did not reflect an equitable distribution across all the regions.

He said the northern sector had mostly been discriminated against and called for immediate solutions to the issue.

“The Upper East Region currently has only about 30 doctors actively providing service to the over 1.3 million population with an estimated doctor to population ratio of one to 43, 000,” he said.

The President explained that the GMA had been advocating one region one medical school policy, adding that, “satellites campuses can be established in the regions.”

That, he said the students who were from underserved regions would be trained to serve their regions, while students who had experienced conditions in the deprived areas because of the training and clinicals would be willing to accept posting to those areas.

Dr Serebour said the government and its agencies needed to develop and implement location specific incentive packages to attract and retain medical doctors and other health workers to deprived areas.

He said apart from working to address the working and living conditions of health workers including provision of accommodation for doctors in underserved communities and create education opportunities for them, government needed to equip the health facilities with the infrastructure and coordination to ensure health workers work effectively.

“The GMA also appeals to its members to accept postings to these underserved areas,” he said.

On illegal mining (galamsey), the GMA called on the government to enforce the ban, adding that destruction of the environment because of the practice was worsening and had dire health consequences on the people.

“We must all continue to expose political actors, traditional leaders and other individuals and organisations involved in the destruction of our lands and water bodies without fear and favour,” he added.