Danger looms in Enchi as four shot dead, with one injured 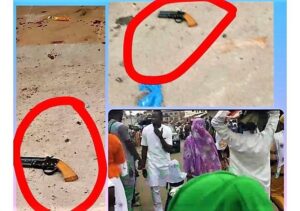 Four unknown men who attempted to attack some persons at the palace of Beyeeman Tano Kwaw Benbuin II, Paramount Chief of Aowin Traditional Area in the Western North Region have been shot dead.

The deceased were alleged to be from the ages of 45 to 60 are yet to be identified by their relatives.

The bodies have since been deposited at the Enchi Government Hospital morgue for preservation and autopsy.

A woman who also sustained injuries as a result of the indiscriminate gunshot into the crowd was rushed to the Enchi Government Hospital for treatment.

A source disclosed this to the Ghana News Agency (GNA) and said the deceased stormed the Paramount Chief’s palace at about 0615 00 on Sunday, October 6, 2022.

It added that though the cause of the attack was not yet known, it was believed to be associated with chieftaincy disputes.

Although the police have refused to comment on the issue, they have beefed up security at the palace and in the Municipality.

When the GNA visited some areas within Enchi, we realized that calm had returned to the town as people were going about their normal businesses without any disturbances.

Some residents appealed to the police to arrest and prosecute anyone involved in the crime to serve as a deterrent to others.

They again called on the police to provide enough security within Enchi and it environs to avert any further attacks.