STEM is a priority in government’s education reform agenda – Minister 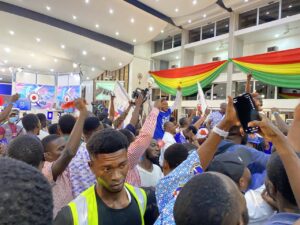 The teaching and learning of science, technology, engineering and mathematics (STEM) will continue to be the priority of the government’s reform agenda in the country’s educational system.

To this end, the government is creating an enabling environment by expanding science resource centers of some existing senior high schools to increase science enrolment and the quality of instructions.

In addition, the government is constructing 10 STEM Schools, including ones solely for girls, at various stages of development.

Dr Yaw Osei Adutwum, Minister of Education, stated this in an address read on his behalf at the closing of the 2022 National Science and Maths Quiz (NSMQ) competition at the Kwame Nkrumah University of Science and Technology (KNUST) in Kumasi.

He said the government, in the short term, had introduced the pre-engineering programme for secondary school graduates with non-science backgrounds to help them pursue engineering at the tertiary level.

Dr Adutwum said the one-year training course which was being piloted at the University of Mines and Technology, Tarkwa, and the Pentecost University had been “a game changer” and was already directing attention of more students into STEM, a situation likely to solve most of the country’s technological and economic needs.

The Minister commended Primetime Limited, producers of the NMSQ and other sponsors for promoting the learning of science and mathematics by organizing the annual event.

He described the event as one which had developed the minds of several thousands of students, good thinking and improved scientific minds about the things around us.

He said regardless of the outcome of participation in each year’s competition, NSMQ ignited a passion to continue a search for knowledge.

Mr. Danquah said that was why the GNPC had aligned with the programme’s producers to promote the study of science and mathematics, which were the bedrock of existence for every society.

“GNPC, as the national oil company, recognizes the urgent need to maximize local content and local participation for the people of Ghana, through developing expertise in STEM within the value chain, for job creation,” he observed.

Professor Oheneba Boakye Agyei, Otumfuo Hiahene, said the study of science was undoubtedly the basis of development and wealth creation, and commended the organizers and sponsors of the Quiz for such initiative.

A child’s embrace and laughter become a woman’s nightmare