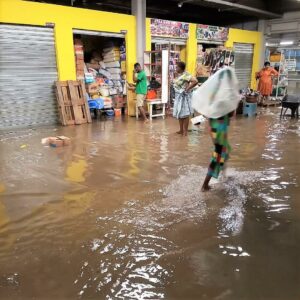 Civil society organisations (CSOs) have been called upon to wage vigorous advocacy at this year’s COP27 for Development Partners to create a loss and damage fund to address climate change disasters in vulnerable countries.

Reports from the Environmental Protection Agency indicate that climate change disasters have caused huge losses and damages to infrastructure and livelihoods in some African countries, and they need financial and other resource to build such infrastructure.

The call was made at a pre-COP forum held for CSOs in Accra to improve their knowledge and understanding on climate change disasters.

Such knowledge and understanding would help the CSO’s to position themselves to campaign for the creation of a loss and damage fund at this year’s Conference of Parties (COP27).

The Accra pre-COP27 forum was on the theme: “COP27 ‘Loss and Damage in the Context of Climate Change Adaptation in Ghana”, and was sponsored by Abibisroma Foundation, and ENDA Energy of Senegal and Africa Climate.

The forum proposed the creation of a dedicated financial mechanism to address loss and damage caused by climate change in vulnerable countries.

It asked that an Intergovernmental Panel on Climate Change should be mandated by the COP to write a special report on global loss and damage with vivid description of disasters and their effects.

They also called for the implementation of the decision taken at COP26, to create an institutional structure for loss and damage; and that loss and damage should be the third pillar after mitigation and adaptation of climate change processes.

They said through the implementation of these proposals, countries vulnerable to climate change would have access to funds to manage their loss and damaged infrastructures like roads, bridges, dams, farms, livelihoods, among other things.

Dr Emmanuel Tachie Obeng, the Acting Director of Climate Change at the Environmental Protection Agency in a presentation said loss and damage were the consequences of the impact of climate change and that go beyond adaptation and mitigation.

He said loss and damage in Ghana is very serious, adding, “We keep on borrowing from the developed countries who were responsible for the climate change and make our economy worse.

He said there were hopes coming as some developed countries were pledging financial support to climate change vulnerable nations, adding, “We are hoping that at COP27 there would be a lot of pledges so far as loss and damage is concern to the vulnerable nations.”