‘The water is not good at all’

As the wind blew down the streets of Emalahleni’s Klarinet township during a cold snap in August, 62-year-old Lettie Mdluli sheltered against the sun-drenched wall of her daughter’s two-room cottage. In the yard between her three-room, state-supplied house and her daughter’s backyard cottage, several of her grandchildren were at play with whatever objects they could find.

In one corner of the yard, plastic water bottles sat piled up, ready to be sold for recycling. None of Mdluli’s five daughters who live on her property are employed. The entire family survives on government child support grants and the little money they get from recycling.

Even providing water to drink is difficult. Although the property has piped water, the municipal supply from the taps is dirty. Mdluli says the water supplied by the municipality is often brown, sometimes even black.

“The water is not good at all. It causes a loose stomach,” she says.

As a result, she tries to ensure the children only drink water that has been boiled first, but between load shedding, electricity cuts due to municipal infrastructure failure, and the cost of electricity for the two-plate stove they use, sometimes they have no choice but to drink what comes out of the tap.

Complaints to the municipality fall on deaf ears, Mdluli says.

A block away, Poppie Maseko sits inside a cramped living room watching television with her elderly mother and two children. She speaks while the family watches the TV.

“We can’t drink the water as it is; we have to boil it first. But, even then, my husband suffers from stomach pains and diarrhea from this water all the time.”

Maseko says her husband is unemployed, and the family survives on child support grants for the two children and the R350 ($20) monthly social relief grant introduced during the Covid-19 pandemic.

“We spend over R300 [$17] on electricity alone, because we boil about five liters of water every two days for drinking,” she says.

Mdluli and Maseko’s experience is supported by publicly available data on the national Department of Water and Sanitation’s Integrated Regulatory Information System (IRIS), an online site that tracks the quality of drinking water, as well as the quality of effluent released from wastewater treatment plants across the country.

Like the two women, hundreds of thousands of the approximately 500,000 residents of Emalahleni municipality have had their constitutionally-guaranteed right to water violated in recent years.

The reasons for this ongoing situation are murky. The municipality’s multi-billion rand debt and the continued flow of untreated sewage into dams that provide drinking water lead the list of possible culprits.

But the municipality’s poor repair record and refusal to account for their actions raises the prospect that the abuse and its ensuing damage will continue, according to a process controller, whose name is being withheld to protect her from professional retribution.

“Our senior supervisors are very much aware of the conditions here,” she said. “They come to this plant, but nothing is being done to rectify the situation.”

As an authorized water service provider, Emalahleni local municipality is responsible for four water treatment works, which are supposed to supply drinking water to the residents in its jurisdiction that meets South African National Standards.

There are six indicators for the quality of drinking water supplied – the most important of which are concerned with fecal bacteria (microbiological compliance) and chemicals impacting human health in the short- and long-term (acute and chronic chemical compliance). The other three are related to the color and clarity of the water, the water treatment works’ operations and the proper use of disinfectants.

Results from water tests taken throughout the distribution system are supposed to be uploaded to the IRIS site on a monthly basis, which are then depicted as a percentage of compliance, calculated on a 12-month running average. 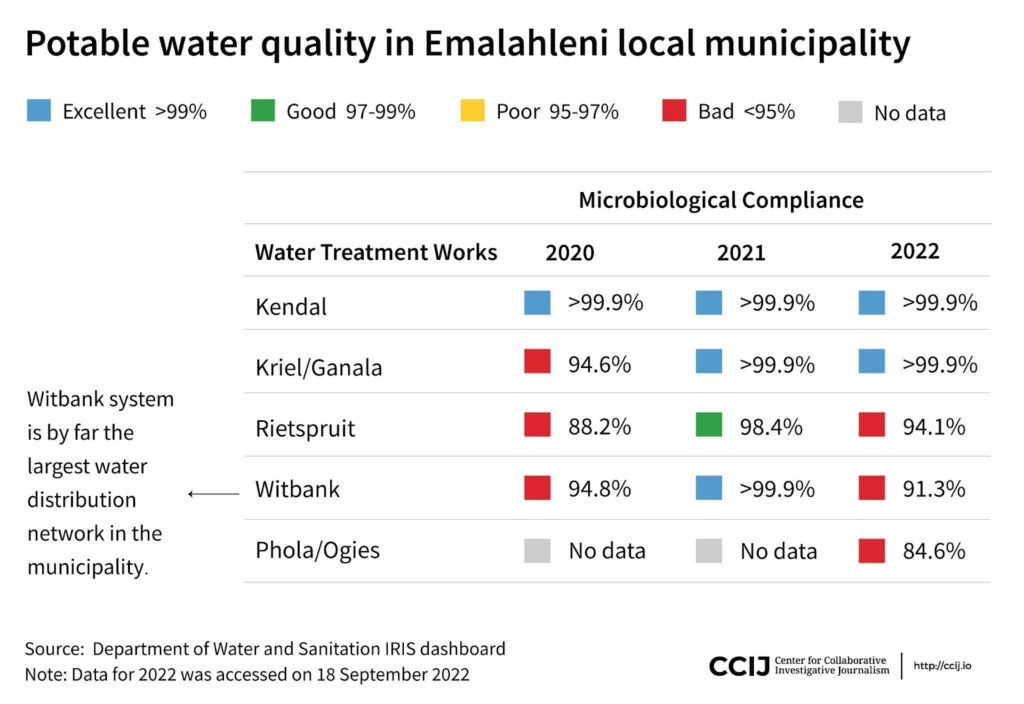 Data scraped from the IRIS site on June 18 showed Emalahleni had 0% compliance on all six indicators. From a data perspective, this is an indication no results were being uploaded, despite it being a legal requirement.

Then a search on the IRIS site on September 18 showed Emalahleni was failing to meet minimum drinking water quality standards. For drinking water, a minimum 97% compliance is required, yet the municipality’s Witbank distribution system – by far the largest – had a microbiological compliance of just 91.3%. The smaller distribution systems, Kendal and Kriel/Ganala were compliant, but Rietspruit and Phola/Ogies were also failing, with 94.1% and 84.6% compliance, respectively.

The Department of Water and Sanitation spokesperson Sputnik Ratau said the department had engaged with the municipality on its failure to submit potable water quality data to the IRIS site. Ratau added his team is “closely monitoring the implementation of a plan” provided by the municipality to improve water quality and “providing support where needed.” Numerous attempts to reach out to Emalahleni municipality were made, but no response was forthcoming.

Emalahleni is not an outlier. The IRIS site shows it is but one of 101 water-supplying municipalities that are failing to provide clean and safe drinking water to residents, according to the data scraped on June 18. 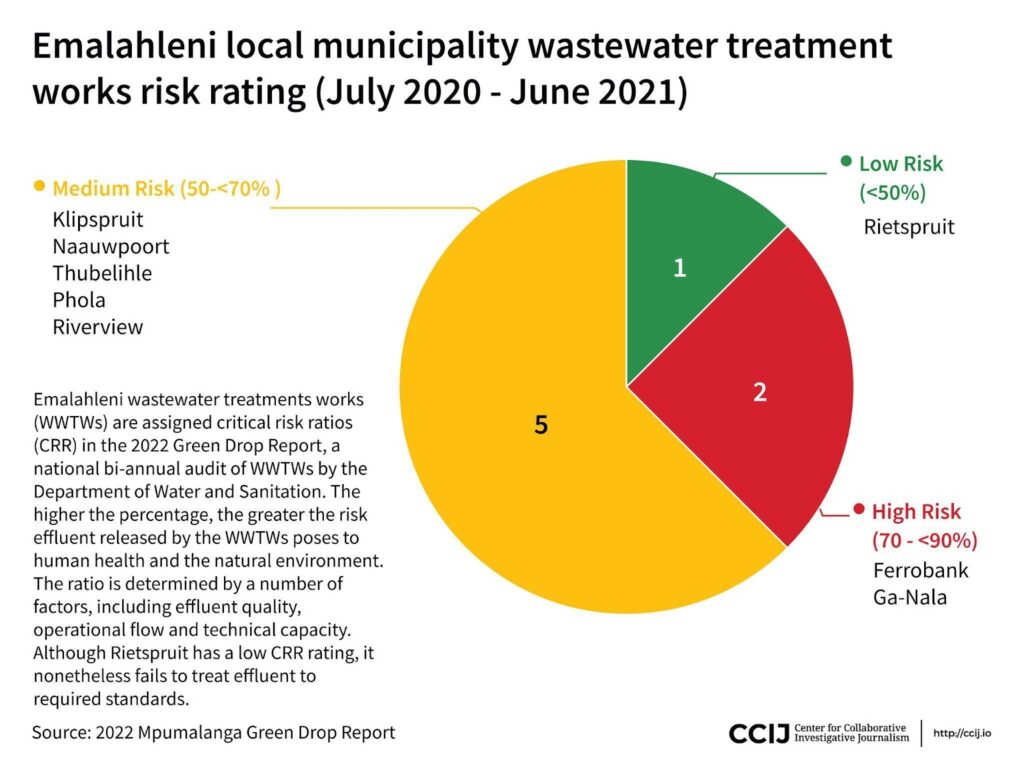 Of these 101, 35 had 0% compliance across all six indicators – including microbiological compliance, which Professor Anthony Turton at the University of Free State’s Centre for Environmental Management says is the easiest factor to treat.

Microbiological compliance relates to the number of fecal coliforms in the water, of which there should be less than 10 colony forming units per 100ml. Turton says fecal coliforms do not survive long outside the gut where they originate and are easily killed with chlorine. And yet municipalities are failing to spend the funds to do even that.

Why Emalahleni is failing its residents

The reasons for Emalahleni’s failure to provide clean drinking water are not entirely clear. Despite providing three days for response, questions sent to the mayor’s office, the municipal manager and the media liaison officer went unanswered.

However, two factors are likely to play a significant role. First, according to the auditor general, the municipality was R3.03 billion ($167 million) in debt as of June 30 last year. Second, and likely as a consequence of this financial shortfall, untreated sewage continues to flow from the wastewater treatment works operated by the municipality into two dams where drinking water is extracted.

There are three compliance indicators for wastewater – microbiological, chemical and physical. The IRIS site shows all eight of Emalahleni’s wastewater treatment works fail to treat the wastewater to minimum standards – and have been failing since at least 2020.

This results in about 44 million liters of untreated or partially treated sewage released into the environment per day. Three of these failing wastewater treatment works release 11.2 million liters of effluent into streams which flow into the Rietspruit and Witbank dams, where Emalahleni residents extract drinking water.

In the case of the Rietspruit wastewater plant, which only achieved 31% microbiological compliance over the last 12 months (a failing grade) – and had three high-level failures this year for ammonia content, microbiological contaminants and chemical oxygen demand – it releases 2 million liters of effluent directly into the Rietspruit dam per day. According to information on the Emalahleni municipality website, 3.5 million liters of water is then extracted from the Rietspruit Dam for drinking water per day.

During a visit to the plant in August, the process controller said neither of the two generators were working, which meant sewage treatment simply ceased during power outages. She said the screen, which is the first process wherein solids are removed from the incoming sewage flow, was not working, sludge dams were full and the sewage flow was greater than what the plant is designed to handle.

Weeds, broken machinery and dilapidated buildings are evident within the plant. The building where staff are supposed to attend to administration and take their lunch breaks lacks ceiling boards, and the existing furniture is old and broken.

“It’s been more than 10 years, and this plant has been dysfunctional from way back,” she explained. “We report these things, but the municipality takes a long time to fix them.”

Ratau, the government spokesperson, said the municipality was ordered to remedy failures at Rietspruit and Riverview wastewater treatment works in November 2019 and November 2020, respectively, but these orders had been ignored. Follow up inspections at both plants in November 2021 found “there was no remedial action taken to rectify contraventions,” he said.

“The Department is currently in the process of taking further enforcement action against the municipality,” stated Ratau. Despite a follow-up message to the municipal manager asking for further explanation, no response from the municipality was forthcoming.

A place for cleansing

Within sight of the stream of partially treated, and at times untreated, sewage released from the Riverview plant is a shallow ford across the Olifants River. Situated on the edge of town, the ford is dotted with candles and chicken feathers – a sign the site is used for traditional cleansing rituals.

As Emalahleni resident Mmathabo Lebona returned to her car after engaging in one such ritual, along with her husband and other members of her church, she confirmed that the municipal drinking water supply is polluted.

“We don’t drink this water at all; it’s bad,” Lebona says, referring to the supposedly potable water piped to their homes. “The taste is bad. There have been cases where people get a running stomach after drinking it.”

But unlike Mdluli and Maseko, Lebona has enough money in her household to buy bottled water. She says she does not allow her children to drink tap water “because of the danger.” Lebona adds, “We buy bottled water from Oasis [a national brand with dispensers in supermarkets where customers can fill their own containers] and elsewhere.”

Lebona also said she was unaware of the risk posed to her and others’ religious and cultural practices on and around the ford because of a nearby failing wastewater treatment works. She was surprised to learn of the 11 million liters of effluent flowing from the failing plant just 400 meters downstream toward her sacred site.

Unless Emalahleni, along with municipalities in similar or worse positions across the country, act to repair and refurbish their entire water collection and distribution network, Lebona, Mdluli, Maseko and millions of other people in households like theirs will continue to have their constitutional rights to health, dignity and a healthy environment violated.

By Steve Kretzmann and Chris Gilili

A version of this article was first published by GroundUp.