Ulysses from Ghana, a film inspired by Mohamed Ben Abdallah, screened in Paris 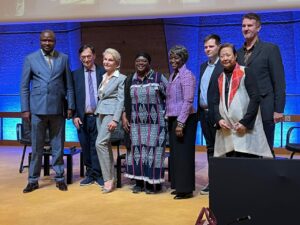 The South-South Cooperation Council for Sustainable Development (SSCC) has screened Docufiction Ulysses from Ghana at a film screening event held at UNESCO’S headquarters in Paris, France.

Ulysses from Ghana is inspired by the play “Slaves” written by Ghanaian author and playwright Mohamed Ben Abdallah.

The Transatlantic trade, depicted in the play, marked one of the darkest pages in the recent history of humankind.

The play also waves into the story of play commentaries of contemporary Ghanaians on novel forms of modern-day slavery as well as vestiges of racial discrimination across the globe as illustrated in Black Lives Matter Movement.

The play explores the social injustices humanity evokes on itself and evaluates the healing process initiated for the present generation of Ghanaians and Afro -descendants who suffered from social injustices such as discrimination, racism, and slavery.

The original version was written in 1972, and first produced at the University of Ghana, Legon.

In the same year, it became the first non-American play to win the Randolph Edmonds Award of the National Association for Speech and Dramatic Arts in the USA.

It has since been performed many times and has received critical acclaim in Ghana and abroad.

Dr Akosua Abdallah, the daughter of the Playwright in a Phone interview with the Ghana News Agency from Paris, said the docufiction was an initiative of the South-South Cooperation Council, the Columbian Embassy in Ghana and supported by the International Theatre Institute Ghana Chapter.

The Co-Director of the docufiction, and the President of ITI Ghana, said Ulysses from Ghana, highlighted not only the impact of slavery today, but also the trajectory on reaching a catharsis that could lead to reconciliation.

“A reconciliation that will strengthen transcultural communication between Africans and the diaspora,” she said.

She said global estimates indicate that there were as many as forty million people living in various forms of exploitation known as modern slavery, this includes victims of forced labour, debt bondage, domestic servitude, human trafficking, child labour, forced marriage, and descent-based slavery.

Dr Abdallah said solutions to all this was the collective responsibility and efforts by all on how stakeholders could facilitate the gargantuan task in the various countries and communities.

“We all have shanty towns, ghettos, Zongos and Jamestowns in our respective countries,” she said.

She said one of the main reasons for this conversation was not just to showcase Ulysses but to collaborate.

Dignitaries that addressed the season include Mr. Gilbert Dadzie, Permanent Delegation of Ghana to UNESCO, Ms. Gabriella Ramos, Assistant Director-General for Social and Human Sciences, UNESCO, and Mr. Toussaint Tiendrebeogo, Secretary of the Convention for the Protection and Promotion of the Diversity of Cultural Expressions, UNESCO