High cost of living not peculiar to Ghana – Dr Bawumia 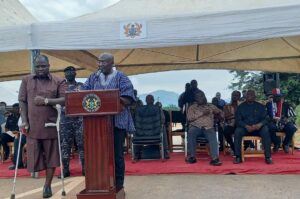 Vice President Dr Mahamudu Bawumia has said the rising cost of living was not a Ghana-specific but a global phenomenon.

He attributes the situation to the COVID-19 pandemic and the Russian-Ukraine war.

“The cost of living has gone up across the world. Everywhere where is hot, town is hot, and it is not only Ghana. Same applies to the UK, America, Japan and Germany.”

Dr Bawumia, addressing a gathering at Kadjebi in the Oti region to commission the 56.4 kilometre (km) Jasikan-Dodo Pepesu stretch of the Eastern Corridor Road, said the International Monetary Fund’s (IMF) Managing Director has attested to the fact that the pandemic and the war and their effects caused Ghana’s problems.

“So, you see that we in the midst of this pandemic are doing everything to keep the economy going.”

Dr Bawumia said one thing government did for Ghanaians and the people of the Oti Region was to make sure they had free Senior High School education for all to lessen the burden on them.

He said the government was digitalising and changing the future of Ghana’s economy which would be one of the most digitalised economies in the world.

Dr Bawumia said the Year of Roads was not a “Green Book” one but “Fili fili roads” adding that “we have never seen roads constructed and completed by any government as much as we have seen under the government of Nana Addo Dankwa Akufo-Addo and leadership of Kwasi Amoako-Atta as Minister of Roads and Highways.”

He said the Jasikan-Dodo Pepesu Road was part of the Eastern Corridor Road project which started from the Tema Motorway Interchange with a component of the construction of 67km Tema to Akosombo road with interchanges at Ashaiman and Akuse.

Dr Bawumia said 8-Lot of roads were currently under various stages of completion under the first phase of the Sinohydro Road project.

He said government had completed 109km of trunk roads under the Ghana Highway Authority within the Volta and Oti Regions since 2017 including the upgrade of 21km Nkonya Wurupong to Kwamikrom road.

Dr Bawumia said under the Urban Roads, a total of 31km of roads had been completed within the same period such as the asphalt overlay of 14.7km in Hohoe while 27.5km of roads, rehabilitated in the Feeder Road category.

Mr. Kwasi Amoako-Atta, Roads and Highways Minister, said the Ministry through the Ghana Highway Authority, shall make sure that adequate provision in their annual budget to cater for the maintenance of constructed roads was made year after year.

He said the maintenance was necessary to protect the huge investment made by the government.

Mr. Amoako-Atta urged all beneficiary communities to protect their roads and road furniture.

He admonished them to desist from cutting through their roads, establishing washing bays along the length of the roads, damaging road signs and avoid dumping building materials on the roads.

Mr. Amoako-Atta tasked the Municipal and District Chief Executives to make sure that people adhered to the road maintenance measures and cracked the whip on culprits.

He asked religious and traditional leaders not to entertain culprits and unpatriotic citizens who engaged in activities to damage the roads.

Mr. Amoako-Atta commended the Sinohydro Corporation Limited for putting up a tremendous work.

Dr. Joshua Makubu, the Oti Regional Minister, said the contractor working on the Jasikan to Worawora road, Nkwanta to Dambai road and the Dambai township road had given the assurance of returning to work.

He expressed gratitude to the government for the road infrastructure in the Oti region and commitment to the region’s infrastructural development and humanity.

Use of only Ghana Card for voter registration will eliminate minors, foreigners – EC