Mental illness is a medical condition and not a curse 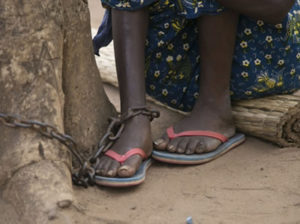 On Tuesday August 2, Ghanaians woke up to a horrible news that a woman with mental illness attacked and repeatedly hit the head of a motorbike rider with a piece of rock killing him instantly, on the Kwame Nkrumah interchange, in Accra.

Prior to the killing, eye witnesses account observed that the woman with mental illness was throwing stones at moving vehicles and the victim was trying to prevent her.

As strange as it was, the incident confirms fears of the public on the risk such people on the streets posed to the public and as a wake up call for authorities to act by removing mentally challenged persons from roaming the streets.

Persons with mental illnesses in most cases are homeless and are everywhere, they are encountered on daily basis chasing people and defecating in the open causing nuisance in public space.

Mental illness is often attributed to curses or superstition, a phenomenon which prevents families from seeking medical attention coupled with financial constraints.

Current statistics from the Ghana Mental Health Authority and the World Health Organisation suggest an estimated 3.1 million Ghanaians, representing 10 per cent of the estimated 31 million total population having a form of mental disorder, with about 16,000 of the cases reported to be severe.

The unfortunate incident is a wake up call for all of us to take mental healthcare seriously and get involved in every way to ensure a good investment in that health sector.

It is estimated, also, that about 20,000 mentally ill persons roam the streets nationwide, as of 2021. More than 1600 of them are said to be in Accra and Tema alone, and their number is projected to rise further.

Mr Peter Badimak Yaro, a national convener of the Mental Health Alliance, in an interview with the GNA under the Journalists for Human Rights (JHR) said mental illness is not a curse or a superstitious illness but a medical condition and urge relatives to seek for medical treatment.

He said the state had failed to make the needed investments in promotion and financing of mental health resulting in mentally challenged persons becoming destitute and nuisance in the public space.

“As an organisation, we have always called for social protection schemes because most people with this condition are at the lower end of the economic bracket making it difficult for relatives to seek medical care,” he said.

“Under the Person’s with Disabilities (PWDs) Common Fund allocation, persons with mental illnesses are supposed to be catered for but there is system and operational challenge making it difficult for such people or their relatives to access, he disclosed.

In view of that we have also advocated that person with mental illnesses should be covered under the Livelihood Empowerment Against Poverty (LEAP) so relatives can fall on something to take care of them, he added.

Again, we are advocating for community-based treatment centres for access to mental health care at localities within reach of relatives of people with such conditions.

Madam Priscilla Tawiah, Deputy Director Community Care of the Mental Health Authority said, “persons with mental health illnesses living and roaming on the streets is an indication of how as a people we have not given that area of health care the needed attention.”

She recalled that in 2012 her outfit began picking persons with mental illnesses on the street and treated them but that got stalled due to financial constraints “after treating them families refuse to accept them due to financial reasons.

According to her, the Metropolitan, Municipal and Dstrict Assemblies (MMDAs) have a significant role to play in rehabilitating persons with mental illnesses, so we have engaged them as part of our working plan to get all stakeholders on board.

Generally, mental health care is improving but there is more to be done “so we call on all stakeholders particularly families/relatives to show more concern by sending such persons for treatment early and committing to their welfare”.

Aunty Grace is a 56 year old mother living at Okorase, near Koforidua whose 33 year old daughter is suffering from mental illness has said but for the support of her family in terms of funds it would have been difficult to take care of her medication and care.

“Every month I have to travel with her to Pantang hospital in Accra for treatment and medication and because of her condition, we can’t join public transport so, we have to hire a vehicle and that is a huge cost”

My two other children are living abroad and so they support me with funds, and I had to quit my job as a civil servant to give her the needed care, otherwise, she would have ended up on the streets like others, she said.

Mrs Juliana Owusu, a former psychiatric nurse and mental health advocate explained that mental illness like any other illness start mildly like mental or psychological distress but often it’s not given the needed medical attention.

She said abuse of substances are the cause of mental illness and psychological factors which are medical conditions treatable or manageable to prevent escalation to a deteriorated state where they live on the streets.

She advised that people should seek medical attention when they are going through some form of psychological or mental stress or any traumatic situation to prevent escalation to full blown mental illness.

Ghana’s mental health care system has several strengths and challenges. The Ministry of Health is committed to deinstitutionalization and integration of mental health services into a variety of health care settings. Ghana has an established mental health legislation and governing board. A variety of evidence-based treatments are available at public psychiatric hospitals, and within communities, there are there are several nongovernmental organizations that support self-help groups for people with mental health conditions.

Despite progress, challenges remain. The distribution of mental health services is skewed toward the southern part of the country, with limited services available in the northern region. Services and resources are concentrated in psychiatric hospitals rather than more accessible community settings. There is a significant treatment gap.

CSIR-CRI scales up engagement with stakeholders on pepper varieties