CSIR-CRI scales up engagement with stakeholders on pepper varieties 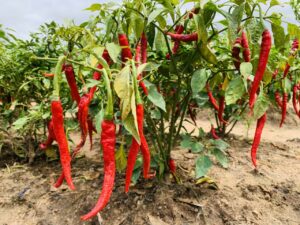 The Crops Research Institute (CRI) of the Council for Scientific and Industrial Research (CSIR) is engaging stakeholders in the pepper value chain to enable it develop varieties that meet local and international demands.

Dr Michael Kwabena Osei, Senior Research Scientist and Vegetable Breeder at CRI, said the objective was to ensure that players in the sector accepted and used varieties that were released by the Institute.

“The rationale is to work with farmers throughout the process. In the past years that the CRI released pepper varieties, farmers were not involved in the process and even though the varieties were there, we saw that the patronage was not good”, he stated during a field trip for farmers at the Institute’s breeding farms at Kwadaso, near Kumasi.

“We are now doing demand-led-breeding which involves that the CRI mobilizes the stakeholders so that they will be part of the selection process of new varieties”, he observed.

Dr Osei said the CSIR-CRI was currently doing participatory selection of about 28 different lines of pepper varieties, which were obtained from the World Vegetable Center.

The participants of the field trip made up of market players, farmers, seed companies and research scientists used the occasion to look at the general appearance of the different lines of pepper, disease, fruit appearance, sizes, shapes, fruit colour, pungency and aroma (degree of hotness).

According to Dr. Osei, the idea was to help make a good selection and make multi-location trial which would take place in different agro-ecological zones and on farm trials, to see how selected lines performed.

This will prepare scientists to make selection and get close to varietal release where they will conduct economic analysis, sensory trial and laboratory analysis among other tests.

Professor Moses Brandford Mochiah, Director, CSIR-CRI, giving the background, said pepper was the leading vegetable export from Ghana with its main market in the Europe.

It plays vital role in the lives of many people.

In Ghana they are used in all types of food preparation and come in different types such as the scotch bonnet, long cayenne and the bird eye.

Prof Mochiah indicated that the CSIR-CRI’s collaboration with the World Vegetable Center led to the release of two first ever pepper varieties in Ghana.

The Shito Adope and Maakontose are the varieties released in 2005.

He was optimistic that the multi-stakeholders’ approach would help in selecting the best traits in pepper for varietal release.

Dr. Derek Barchenger, a Scientist at the World Vegetable Center, said the organization was prepared to collaborate with stakeholders and support vegetable farmers to produce sustainable, safe and healthy vegetables.

He believed the field trip would allow for better understanding of the farmers to be able to tailor the needed assistance to support production.

Mental illness is a medical condition and not a curse