The story of David Anankaning: Security officer at night, ‘waste collector’ in the day

Every Sunday morning David Anankaning, a private security officer, sets out to collect used plastic bottles generated from hand-made plastic bins he has deployed on some busy streets in Accra, Ghana’s capital city.

Every week, the bins, numbering 35, generate more than 1,000 plastic bottles dropped by pedestrians and motorists, who hitherto would have discarded them on the streets.

David, 51, makes the bins himself by fastening together between 120 and 150 plastic bottles (depending on the size) into a metallic structure designed with iron rods. He creates a small opening at the top of the square-shaped plastic bin to ensure that the user does not drop any waste beyond the size of a bottle.

This innovation, David said, was inspired by his concern about the rate at which plastic waste had engulfed drains, water bodies, and the ocean – and he feared the situation could worsen in the near future.

His main goal, he said, was to contribute to the protection of the environment, particularly the ocean, and contribute his quota towards achieving Goal 14 of the Sustainable Development Goals – “Conserve and sustainably use the oceans, seas and marine resources for sustainable development.”

“This is a voluntary exercise. I think it is the fastest way to protect the environment from plastics. The plastics we throw away can be turned into useful items without recycling.

“Anytime I visit the beach and I see the amount of plastic waste at the shore, I get scared. I believe that the best way to stop people from littering is to make bins closer to them and encourage them to do the right thing,” he said.

Plastic waste management is a major challenge in Ghana. Plastics are indiscriminately disposed into drains and water bodies, resulting in perennial floods across the country.

According to the Document, more than one million tonnes of plastic waste are generated every year, suggesting that domestic manufacturing accounts for less than 5 per cent of all plastics entering the economy.

The burning of plastics, which is a wide-spread activity in Ghana, releases toxic substances into the atmosphere and contributes to climate change.

After four months, the bins had generated more than 16,000 discarded plastic bottles, all of which have been kept in his home in Accra to serve as raw material for more bins.

“The challenge is that I don’t have the needed resources to make more bins. All the ones I have deployed are from my own resources,” he said.

David said each bin cost him about GH¢178 ($17) being the cost of iron rods, bending wire, and other materials which he uses to build the metallic structure in which the plastic bottles are arranged.

He said a friend was assisting him to put together a proposal, which he would present to selected institutions for assistance.

“I do not desire to commercialise this innovation. It is my hope that through this initiative, we can deploy many bins onto the streets so we can reduce littering and protect our environment and promote our health,” he said.

David said the innovation could serve as an employment avenue and expressed his desire to train the youth on how to make the bins in their homes.

Plastic bottles and sachets are vital source of clean drinking water, but with little formal waste collection, they are also a dangerous source of pollution.

More than 17 million metric tons of plastic entered the ocean in 2021, according to the United Nations Environment Programme (UNEP). 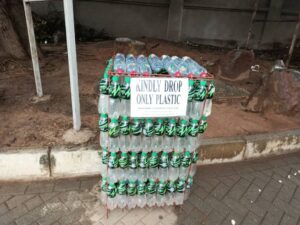 According to scientists, marine plastic pollution breaks down into microplastics and contributes to climate change through direct greenhouse gas emissions and affects aquatic life and ocean organisms.

The UNEP has indicated that the amount of marine litter and plastic waste, has been growing rapidly and that without meaningful action, emissions of plastics into aquatic ecosystems, are projected to nearly triple by 2040.

According to the latest report published by the World Wildlife Fund (WWF), 88 per cent of marine species are affected by severe contamination of plastic in the ocean.

The report said that many animals have ingested these plastics, including animals commonly consumed by humans.

David’s innovation may not entirely solve Ghana’s plastic waste challenge, but it could help to significantly reduce plastic littering on the part of pedestrians and motorists.