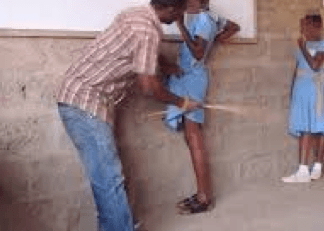 The Ghana Education Service (GES) in 2017, officially banned all forms of corporal punishment of children in schools as part of efforts aimed at promoting a safe and protective learning environment for children.

Subsequently in 2019, the GES developed a positive discipline toolkit, which gives alternatives to corporal punishment to be adopted by all teachers and that is to make room for corrections but not necessarily inflicting pain on anybody or harm on children in the name of punishment.

Corporal punishment is described as physical punishment intended to cause pain to a person and it involves hitting or canning, which often leaves marks or injuries on the bodies of victims and is usually used as a tool for correction in schools.

Many have expressed concern that the move would have serious repercussions on discipline among the youth, particularly those in schools, and have, therefore, called for a review of that directive.

“This directive is going to contribute to the already high level of indiscipline in society, canning has been the major correctional tool in shaping children to become disciplined adults,” a teacher said

Amongst the key stakeholders who have expressed concern is Mr Angel Carbonu, President of the National Association of Graduate Teachers (NAGRAT) is also on record to have said that the surge in indiscipline in schools should be attributed to the relaxation in punishing students at school and called for a review on that directive.

Corporal Punishment such as canning, weeding, kneeling, and holding blocks raised, and standing for long hours have been the forms of punishment in schools in Ghana for infractions such as lateness, truancy, unpaid levies, and fees, and not doing homework, among others.

The United Nations conventions on human rights describe corporal punishment as physical abuse or assault meted out to school children in the name of punishment and article 37 of the UN conventions on the rights of the child states that, “state parties shall ensure that no child shall be subjected to torture, cruel, inhuman or degrading treatment or punishment”

Section 31 of the Criminal Offenses Act, 1960 Act 29(provides that forced harm may be justified on the grounds of an authority to correct a child, servant, or other similar person for misconduct whiles Article 19 of the International Conventions on the Rights of Children states that, “state parties shall take measures to ensure that school discipline is administered in a manner consistent with the child’s human dignity and in conformity with the present convention”

Dr Yaw Adutuwm, Ghana’s education Minister who thinks otherwise. According to him, “countries where school children are not beaten, canned or punished, they have been to the moon, and we have been canning our children in schools for over 60 years but where have we gotten to?”

Mr Daniel Kaku, a 70-year-old retired Director of Education in an interview with GNA noted that canning and punishment only inflict pain and not the only way to correct children. The responsibility of disciplining children remained a key responsibility of parents adding, “if parents have been up to their responsibilities of bringing up their children well, we would not need a teacher or school to go through that burden.”

He said the school environment must be friendly and welcoming for children to always have the urge to go to school and learn instead of being hostile or creating fear in children and giving the impression that corporal punishments are the norms and part of education.

Even though the school and society have a role to play in the upbringing of children, parents carry over 90 percent of that burden and so, the directive cannot contribute to indiscipline in society. As a people, we have to look at parental irresponsibility and neglect which is breeding a lot of deviant youth in the system, he said.

If an eight-year-old child is late for school or fails to do his or her homework and then is canned or made to kneel as punishment, “what is the correction in this? When in fact, such a child is not on her own and she or he is accompanied to school by the parent, in this case, the child has no control over when to come to school and it is wrong to cane or punish such a child. We must put all these scenarios into context when it comes to matters of discipline and punishment.”

He encouraged teachers to use other correctional means which would build confidence in children and make them appreciate and understand why they are corrected and not abuse them in the name of punishment or correction.

Dr John Boakye, an educationist, and Christian Counsellor said studies have shown that corporal punishment never solves a problem or corrects children, it creates fear and hatred in children who grow to be abusers.

As a teacher, I have never believed that canning or other forms of corporal punishment has anything to do with discipline corroborating that it only inflicts body pain or harm and I believe strongly that can use redrawal of some privileges or focus on rewards as a means to correct other than physically abusing.

“Why do you cane a child when he fails in the examination, physical punishment only makes a child worse, stubborn violent, and sometimes timid dumping his or her spirit, and that for me is more dangerous than not resorting to corporal punishment at all,” he said.

On the biblical reference that “spare the rod and spoil the child,” he noted that it was unfortunately misapplied adding that, “the Bible must be understood in context because that scripture was written to a particular people and serves as a guide for correction but not necessarily apply physical abuse,” he added.

Madam Yaa Kusi, a former Montessori teacher on her part said there was evidence to show that children with good training from home, are usually disciplined and that reinforces the fact that canning or corporal punishment is the magic wind for discipline, “otherwise children from Montessori schools should have been the most indiscipline youth in society but we all know the outcomes.”

Whiles hailing the ban on corporal punishment in schools she called on effective bye-laws which would hold parents responsible for their underage children’s violent behaviors “if a 15-year-old boy can rape someone at night where are parents? Certainly, we cannot say because such a child was not punished at school hence the violent behavior.”

Canning or corporal punishment is a human rights issue, the point here is that children must be corrected and guided to behave acceptably in society, but that is not about corporal so teachers should not feel slighted, should use the appropriate laid down measures to make the school environment friendly and welcoming, she added.

Dr Akua Darku, a parent and a clinical psychologist said canning in schools or punishment had psychological effects on children leading to unpleasant outcomes and stressed that counselling and correctional methods are the most recommended approaches to be used in schools especially when the one prescribing the punishment is not a parent.

She recalled how she was mercilessly canned by her class six teacher for failing in mathematics “even at that tender age I felt I was not treated well and out of anger and pain I stopped that school, I was fortunate to travel outside, other unfortunate children dropped out of school for reasons like this which cannot be justified under any circumstance.”

“Some of the reasons for canning or punishing children in schools are just unreasonable, banning corporal punishments or canning does not mean break down of discipline the guidance and counselling units in schools should rather be strengthened so that children would be corrected and guided in a more civil and lovely manner, so abuse does not become an option”

“We are canned or punished for everything and sometimes it hurts, the last time I was late for school because I couldn’t get a vehicle early and I was asked to kneel on the school compound for two hours whiles my mates were learning in class,” a form two Junior High School student said.

The story of David Anankaning: Security officer at night, ‘waste collector’ in the day